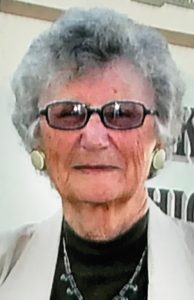 Anne Rinderknecht quietly passed away at her home in Almont, with family at her bedside, on March 8, 2021. She was born on June 3, 1923 in Brown City, MI to parents Blanch Bennett Huston and William J. Huston. Anne married Harry E. Rinderknecht on June 12, 1947.

Anne moved to Almont at the age of 11 when her mother came to teach school in Almont. She and older sister, Marion, attended the one room school house on Bordman Road where their mother taught. They lived in a small house on Fisher Road and walked to school every day. Landscape architect, Henry Stockman, and his wife, Katherine, played an important role in Anne’s life. She spent many summers in Florida with them at the Ormond Beach Tropical Gardens that Henry had created. Later Anne, her sister and mother moved to Johnson Street in Almont, and in 1941 Anne graduated from Almont High School where her mother also taught.

During the war Anne worked in Detroit. It was after the war that she met WWII veteran Harry Rinderknecht and they married in 1947. In 1948 their first daughter, Sally, was born, followed by Sue four years later. Anne and Harry loved country life and in 1953 took the unusual step of remodeling a horse barn on Bordman Road, near Anne’s first home in Almont Township. The barn was next door to the farmhouse of the Stockmans. At that time, it was unheard of to take a barn and turn it into a house. Working together, she and Harry did all the hands-on work of creating a one-of-a-kind home with 100 year old beams, cathedral ceiling, and winding staircase. This house barn is now the residence of granddaughter, Abby Locher. They always worked as a team throughout their marriage and were never without a project. Anne and Harry created an idyllic childhood for daughters Sally and Sue with evenings around the fireplace and days outside enjoying life in the country. They were devoted to one another. Anne and Harry were married for 52 years.

Eventually they moved from the house barn to the 1830 farmhouse next door that had belonged to the Stockmans. Once again, Anne and Harry put their creativity and hard work into creating a warm and inviting home.

After daughter Sally moved to Vermont to teach, they bought a home built in the 1800s in Stowe, VT and, once again, took on remodeling. Anne and Harry spent many wonderful years enjoying New England and being near grandchildren. They felt they had the best of both worlds, dividing time between Vermont and Bordman Road, where they were near Sue and grandchildren.

Anne seemed to know almost everyone in Almont. She became the Almont District Library librarian for many years, a job she loved. Later she took school census and drove school bus for the Almont School District. Eventually she went on to become the elementary school secretary for twenty-five years. She worked under a number of principals and remained the constant figure in the elementary school for children and teachers. Anne loved her job, often putting in long hours and going the extra mile. When she retired, she and Harry split their time between Bordman Road and Vermont, enjoying every minute. Both of them enjoyed the simple things in life each and every day.

After Harry died in 1999, Anne stayed in Vermont with Sally and then returned to her home on Bordman Road for ten years. In 2009 she moved to Vermont for a year to live with Sally. She later bought a home with Sue on West St. Clair Street where they both resided. Anne also spent another year living in Vermont, before coming back to Almont.

Through out her life, including the day before passing away, Anne repeated many times what a wonderful life she has had and that she wouldn’t change a thing.