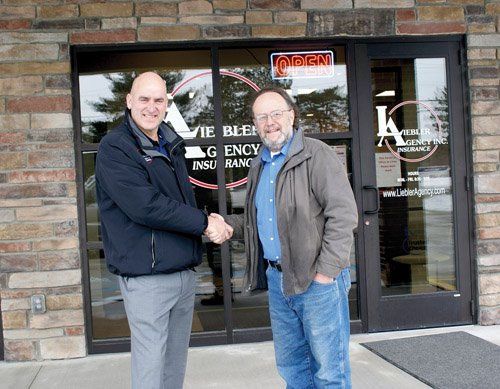 Jeff Liebler and Paul Atkins have forged both personal and business relationships during their accumulated years of serving the insurance needs of local residents and businesses.

Atkins, who had spent nearly 40 years in the insurance field, is retiring to pursue other interests and opportunities.

He leaves behind a loyal customer base which Liebler intends to serve with the same degree of care and professionalism.

Liebler said the opportunity to acquire the business ensures a smooth transition and a continuum of quality service for Atkins’ customers and clients.

“We’ve known each other for a long time and I have a great deal of respect for Paul,” Liebler said this week. “We see this merger as being good for everyone involved.”

Atkins began his career in 1978, as a “rookie” agent for his father’s insurance agency, Atkins Insurance in Marlette.

In January 1983, he purchased the former Muir Insurance Agency from Larry and Theda Lichtenfelt of Imlay City.

At the time, Paul and his wife, Marilee, were the sole employees, however, after the couple’s second son was born in 1985, she opted to stay home.

“Our growth was rapid in those early days,” Atkins recalled, due in large part to the considerable time he spent meeting with prospective clients.

“Van Dyke was a two-lane road at the time and the Kroger Plaza had not yet been built across the street,” Atkins said. “With the exponential increase in traffic and the dangers in pulling out onto Van Dyke at certain times of the day, we decided to sell that building and move back downtown.”

The need to move downtown led Atkins to purchase and renovate the building at 230 E. Main St.

“The building was owned by Dr. Glenn Smith when we first got to town,” he recalled. “We ‘doctored’ with him for a year or two before he retired.”

Looking back at the evolution of the insurance industry, Atkins spoke about his introduction to computers.

“We had a Radio Shack a few doors down at the time and they had just come out with the so-called personal computer, a Tandy or something like that. I bought the computer and a book on DOS and taught myself how to program,” he said.

Learning to program provided Atkins the ability to write his own programs and calculate auto insurance rates for various companies.

“These comparative raters could calculate the rates for several companies in a couple of minutes,” he recalled, which game him a distinct advantage.

Atkins said utilizing available technology has been beneficial to him and the insurance industry as a whole.

“We now serve several times the number of clients with the same staffing levels we did years ago with paper files,” said Atkins. “What we have noticed is that our clients absolutely value our accessibility.

“When people have a claim or a problem, they want local people who know their names and can come in and talk to,” Atkins opined. “Most of our clients value the relationship more than saving a little bit on their insurance.”

Time to slow down

Having reached the pinnacle of a rewarding career, Atkins views the merger with Liebler as the perfect scenario for their respective futures.

“In the past year or so I’ve been getting tired,” Atkins said. “I’m 65 and still love working with clients, but I want to slow down and work part time. It’s for that reason we are joining the Liebler Agency.”

He noted that the new arrangement allows his associate, Jennifer, to work alongside Liebler and his staff in his new building located at 566 S. Cedar St. (Van Dyke).

Atkins was quick to note the irony.

“Yep, we’re moving back out onto Van Dyke,” he said.