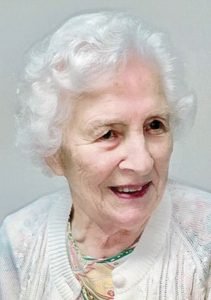 Leona May Thorman, age 92, a lifelong resident of Romeo, passed away February 27, 2021. She was born November 3, 1928, the daughter of Sylvester and Ernestine (Strassburg) Pardon. Leona was one of twelve children growing up on the Pardon Farm on 33 Mile Rd. between McKay and McVicar roads. Their parents passed away at a young age, so Leona assisted in raising her younger siblings. She married her beloved husband Marvin Thorman on September 10, 1949 in Armada and they celebrated their 60th wedding anniversary in 2009 just before his passing. She was a very active member of St. John Lutheran Church. Leona enjoyed quilting, canning and loved spending time with her family. Since her youth, Leona was a caregiver to all those around her including family, neighbors, and friends. She always put those around her first. Her sweet smile and kindness will be missed by many.

Leona leaves to mourn her beloved children, Joan (Patrick) Ludescher of Metamora, Arlene Brinker of Almont, Bruce of Romeo and Carl of Romeo; six beloved grandchildren; and 14 great-grandchildren with the 15th expected in June. She is also survived by her brother, Jim Pardon of Berville.

The private funeral services were held with a burial at Romeo Cemetery.

Be sure to share a memory on Leona’s guestbook at Muirfh.com.