Traditional attractions on tap for July 2021

IMLAY CITY — On Monday, the Eastern Michigan State Fair announced their plans for 2021.

This year’s five-day event will be held the last week of July, as has been the recent tradition. Fair gates will open Tuesday, July 27 and the final ride will spin above the crowds on Saturday, July 31.

The announcement was made via a Facebook post on Monday. Only a handful of local event organizers have signaled their intentions to proceed with plans for large public events in 2021. Already on the calendar are Imlay City’s Sesquicentennial slated for August 13-14 and the Woods-N-Water News Outdoor Weekend on Sept. 10-12.

“We are hoping that we can have a fair in it’s entirety this year,” said Fair Manager Ian Kempf.

“We’re really hopeful that by the end of July we will be back to having large scale events.” 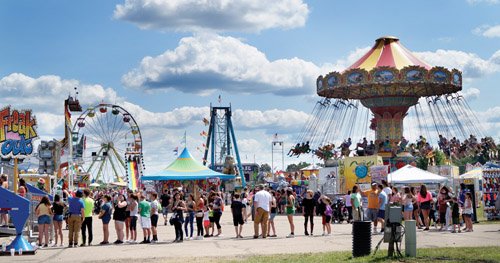 The fair board is confident that rides on the midway and other traditional events will return to the 2021 Eastern Michigan State Fair in July.

Last year, due to COVID-19 safety concerns, the fair board opted to pare down the 2020 Eastern Michigan State Fair and only hosted ‘show and go’ showcases for animal exhibitors.

Kempf said that the fair’s leadership will obviously monitor the pandemic situation on a weekly and monthly basis and adjust their plans accordingly if needed.

Many of the events and attractions that the fair had booked for 2020 were able to be “rolled over” to 2021, Kempf said.

This summer, attendees will be able to enjoy new amenities on the grounds, he added.

Although installed last year, the covered dome in the midway area will be “new” to guests in 2021.

“Most people are probably familiar with it having drove by it but we haven’t had a chance to utilize it yet,” Kempf said.

Plans are also underway to install a new grandstand on the southside of the venue, doubling spectator capacity in that area.

For more information, including the grandstand schedule of events, visit the fairground’s website at www.easternmichiganstatefair.com.