Almont pulls out victory over Yale 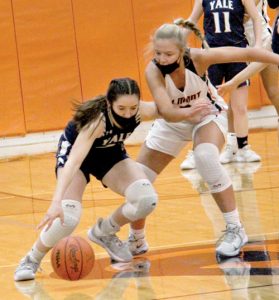 In Friday’s battle, Almont spotted Yale a 10-4 advantage after one quarter was complete.

Almont then outscored Yale 10-5 over the next eight minutes, closing the gap to 15-14 at the half.

When the action resumed, Almont struck with a 3-2 third quarter edge. That made it 17-17 with 24 minutes gone.

Almont then outscored Yale 16-5 from that point on, pulling out a 33-22 victory.

Grace Johnson (nine points, including a trifecta) led Almont’s scoring attack. She was backed by Kendall Roszczewski, Brandi Kautz and Hannah Revoldt (six points each), Grace Koenig and Sarah Hall (two apiece) along with Jesse Hellebuyck and Lizzy Brandt (one each).