Pike steps down as I.C. chief 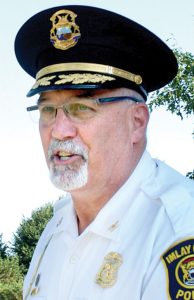 IMLAY CITY — Imlay City Police Chief Scott Pike has announced he will be retiring from his post, effective April 30, 2021.

Pike announced his retirement on Facebook on Thursday, Feb. 25, after first submitting his letter of resignation to Imlay City Manager Craig Horton.

“After long and thoughtful contemplation, I’ve decided that after 39-plus years in law enforcement, it’s time to hang up the badge,” Pike said.

Pike expressed his desire to focus on family as being a reason for the timing of his  retirement.

“I am looking forward to being able to spend more time with my family,” he said, adding that leaving the position will be bittersweet.

“Imlay City will always hold a special place in my heart,” said Pike. “This community is one of the most accepting and caring I have had the pleasure to be associated with.

“Both the citizens and the administration have been so good to me these last years,” he added, “and that made this a very difficult decision.”

Before coming to Imlay City, Pike had served as a lieutenant with the Port Huron Police Department, from where he retired after 25 years.

Upon his arrival in Imlay City, Pike said he had been seeking and hoping to land a position in a smaller community.

On Friday afternoon, Horton acknowledged Pike’s many years in law enforcement; particularly for the five years of service to the City of Imlay City.

Horton expects that Imlay City commissioners will consider all options when seeking a successor for Pike.

While having just been presented Pike’s resignation letter, Horton noted that the upcoming vacancy would be immediately posted and the process for finding Pike’s replacement would begin.

“The commission will probably want to consider all available options for filling the vacancy,” Horton said.

He said that would include considering candidates from outside the community, along with current Imlay City officers who may be interested in the post.