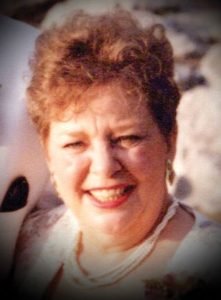 Patricia Louise (Secord) McGulpin, 85, of Fenton, formerly of Imlay City, Utica, and Rochester, died Wednesday February 17, 2021. She was born September 25, 1935 in Brown City to parents Dean and Evelyn (Clark) Secord. She was fortunate to marry twice; to Thomas E. Klein in 1955 and Donald McGulpin in 1974.

Mrs. McGulpin was a caring homemaker for her five children and was very fond of her grandchildren, plus she was blessed with several great grandchildren.

When Patricia Secord was quite young she performed in front of audiences, singing and tap dancing. A record was cut of her singing “Sue City Sue” and the family proudly owns a photo of little Patty dressed as a cowgirl with a guitar on a stage out front of a line of women backup singers, also dressed in matching cowgirl outfits. It must’ve been quite a performance!

Patricia graduated from Utica High School in 1953 where she was active as a cheerleader and was named in her senior yearbook as their Pin Up Queen. She worked as a teenager at Red Knapps Dairy Bar in Rochester. To this day in that iconic restaurant there hangs a long framed photo of the staff back then, taken with original owner Red Knapp and then-current Miss Michigan, and includes a young Patty Secord in pink uniform and white apron showing off her dazzling smile.

She truly loved her dog companions over the years including Ginger the dachshund, and later Chappie the beagle, Chi Chi the bassett hound and Jo Jangles the cocker spaniel. Pat loved state park camping in a trailer when the children were little and at different points in her life she liked to dabble in painting pictures, playing golf or going bowling with her mother Evelyn. She was active at St. Andrew Catholic Church in Rochester for the years she lived in that area. After marrying Don McGulpin, she moved to Houston for ten years, then came back to Michigan when he passed away.

Mrs. McGulpin was preceded in death by her husband: Donald McGulpin, brothers: Robert Secord and Ted Hawald as well as parents Dean and Evelyn (Clark) Secord.

Cremation has taken place. A private graveside ceremony is scheduled for this spring at the Davis Cemetery, Ray Twp, MI, to be officiated by grandson-in-law, Rev. Ryan Winningham.

Condolences and memories may be left at MuirBrothersLapeer.com. In lieu of flowers, donations would be accepted to Grace Centers of Hope homeless shelter in Pontiac, MI.