IMLAY TOWNSHIP — Farmer Kip Siegler keeps doing what he can to put Imlay City and agriculture on the map. His YouTube channel, Kip Sieger Farming, now has more than 20,000 subscribers and he was recently named to Congresswoman Lisa McClain’s Agriculture Advisory Council.

Next up, Kip hopes to use his platforms to inspire others. He’s currently working on transforming office space into a recording studio where he plans to film videos that focus on life lessons, from the perspective of a dairy farmer. 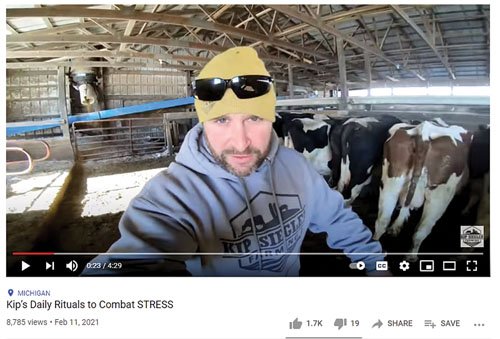 Imlay Township farmer Kip Siegler now has more than 20,000 YouTube subscribers and plans to start a series of videos focusing on life lessons and succesful habits from the perspective of a dairy farmer.

“I think this will be where I can really connect with people,” Kip said.

“Viewers have said they are inspired by my attitude and the way I go after things.”

He’s already filmed and published one video on tips for combating stress in his usual filming environment–the cow barn–but he hopes to transition soon to the studio where his background will be a whiteboard for illustrating his points.

Currently, more than 20,000 YouTube users from across the globe are subscribed to Kip’s channel. That’s a pretty impressive feat for most content creators, let alone someone who encountered hacking issued in late 2019, forcing him to relaunch under a new name. Kip’s been making YouTube videos since March of 2019.

In February he hosted a t-shirt giveaway for viewers. The prizes featured his newest apparel design–a pair of dog tags on the front with his channel logo and the phrase “Family, Farming, Freedom” and Kip’s signature opening line, “Let’s go.” The dog tags are a nod to Kip’s service in the military too. A variety of shirts, sweatshirts, hats and more featuring both Kip Siegler Farming and Siegler Dairy Farm are for sale at farmfocused.com.

Currently, some of his most popular videos are an equipment tour from nearly a year ago with 113,000 views and an overview of what it takes to milk the cows from start to finish has generated more than 95,000 views to date.

Every month, his channel averages 180,000 views and 26,000 hours watched by people from more than 30 countries. The vast majority of his audience—98 percent—is male

He’s currently accepting advertising on the channel from both local and national businesses.

Off camera, Kip will share his knowledge and expertise as a member of Lisa McClain’s eight-member Agriculture Advisory Council. Kip said he credits the 10th District’s new representative for acknowledging her lack of familiarity with the industry but showing an eagerness to learn from the producers she’s asked to serve.

The group, which includes farmers from Tuscola, Sanilac, St. Clair, Huron and Macomb counties, met for this first time on Feb. 11 in Sanilac County–something they’ll do four times per year plus correspond through email.

Also in the near future, the Sieglers’ are also waiting the arrival of their newest family member.

Last fall, Kip captured his marriage proposal to Rochelle Ions on camera and now the couple is awaiting the birth of their son in early March.

His YouTube fans have been sending the couple baby gifts including a handmade blanket.