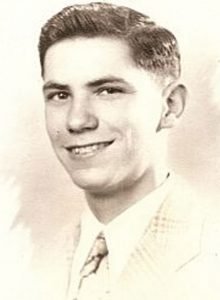 John Marshall Shoemaker, “Jack” to his friends, died on Saturday, November 14, 2020 at the age of 93 in Greenville, Michigan.

As a young boy, Jack’s dad, with his partner, operated the Almont Hardware Store (southeast corner of Main and East St. Clair Street – now Fountain Park). As the Depression worsened, Uriah and his partner agreed that the hardware store was not able to support two families, so Uriah went back to operating the family 80-acre dairy farm full time. As a result, Jack grew up working on the
John Marshall “Jack” Shoemaker family farm and developed his work ethic. The farm was at the corner of Shoemaker Road (named for his grandparents) and West Road (now General Squier Road).

He went to Almont schools through the eleventh grade when his family moved to the west side of the state. After graduating high school, he enlisted in the Navy and saw action in the Pacific theater during World War II.

After being discharged from the Navy, he enrolled at Michigan Technological University to study engineering. In 1955 he founded Midwest Gage, Inc., which he operated for 35 years before retiring in 1990.

Jack was a life-long learner and his passions for history, nature, and art took him around the country and the world. He traveled throughout the United States and visited nearly every continent, touring historical sites, museums, and areas of natural beauty.

Using his engineering and creative talents, he created practical items and objects of art through pottery, wood, and metalworking. However, he will be remembered most for his service to the community. Throughout the years he volunteered for Big Brothers Big Sisters of America, Boy Scouts of America, the Kalamazoo Nature Center, The United Way, Rotary, VFW, and the Frederik Meijer Gardens. He created community cultural events and helped develop affordable housing for seniors. His initiatives culminated in the development of a Veteran’s Memorial in Plainwell, Michigan honoring those who served in the US uniformed services.

Though he lived his entire adult life on the west side of the state, he maintained friendships with the people and community of Almont. He always made it back to Almont for Homecoming celebrations. In 2015, he was named one of the Grand Marshalls for the Homecoming parade – honoring veterans who served during World War II.

Jack lived a full and interesting life to the very end. In honor of Jack’s commitment to service, donations may be made to the Plainwell Veteran’s Memorial Endowment Fund: http://www.friendsof thegreaterplainwellveteransmemorial.org/.

A celebration of life ceremony is planned for April 24, 2021 at the Plainwell Veteran’s Memorial site.