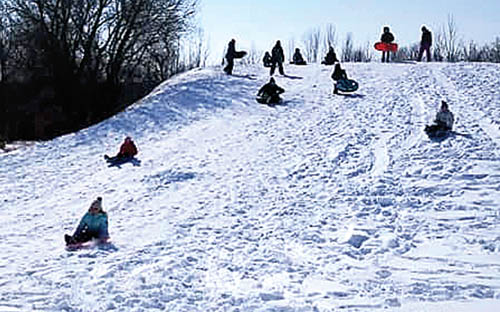 Under sunny skies, outdoor enthusiasts of all ages enjoyed trying out the new sledding hill in Imlay City on Sunday.

I.C. Parks & Rec. chairman thanks DPW for their efforts

IMLAY CITY — City Commissioner Kelly Villanueva, who also serves as chairperson for the city’s Parks & Recreation Board, is issuing an invitation to children and parents.

“We want to remind kids and their parents that the city’s new sledding hill at Lions Park is open to the public,” Villanueva said. “With all the snow we’ve had, this is a great chance for Imlay City kids to have some fun outdoors.”

Villanueva credited Imlay City’s DPW staff for their efforts in creating the sledding hill, which is situated in the southwest portion of the park on Blacks Corners Rd.

“We want to thank the DPW for getting our sled hill ready for winter,” she said. “It looks great and a lot of kids have already been using it.”

Villanueva used the opportunity to update residents of proposed improvements for Old School Park, to include enhanced parking and and possible construction of a pavilion.

She pointed out that the city earlier applied for grant money from both the Four County and Lapeer County Community foundations to assist with costs. Thus far, however, neither grant request has been approved.

Villanueva said there has also been preliminary discussion about using Old School Park as the “kickoff” location for the city’s 150th Anniversary “Sesquicentennial” celebration in mid-August.
Last year’s event was canceled because of coronavirus concerns.
A newly-formed Sesquicentennial Committee has tentatively rescheduled the summer festival for August. 13-14, 2021.