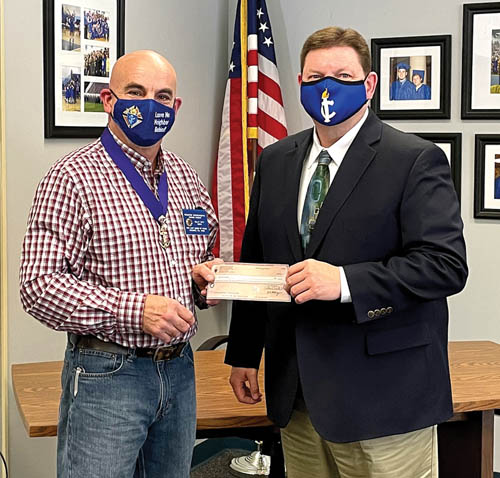 “We are extremely grateful for this generous donation to the Imlay City Schools programs for children with special needs. In a year in which many are financially struggling, it’s amazing that the Knights of Columbus and the community who supports them, were able to generate nearly $1,200 for our students who require the most support. In the best of times, this would be a significant donation – it means even more during tough financial times,” Cameron said.

Woodworth noted that about a dozen Knights of Columbus (KOC) members spent time last fall soliciting donations outside Kroger and at street corners as part of the Tootsie Roll Drive. The drive gets its name from the iconic candy KOC members hand out to donors as a way of saying thanks for their support.

“This is yet another great example of the type of charitable works our local K of C conducts in our community every single day. Their commitment to the principals of charity, unity and faith help make our community better, stronger, and an ideal place to live and to work. The Knights are one of a number of charitable and philanthropic organizations in our area that are similarly dedicated to the people of the community,” Cameron said.

“We’re so thankful to have them looking after our youth and our schools. They truly make a difference in the lives of those around them.”

Cameron said that Dr. Dina Tallis, Executive Director for Curriculum and Instruction, will work with the Special Education department personnel to assure that the funds are best used to support students with special needs.

Woodworth noted that the 4556 Council, based in Imlay City,
has helped numerous communities in the
past, having donated Tootsie Roll drive
proceeds to the Capac and Almont districts previously.