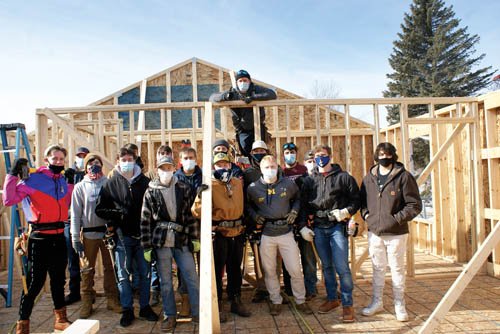 The melding of those essential realities can provide opportunities for young people interested in pursuing a career in the building trades.

Smith said the school’s two-year building construction class and companion programs in electronics, plumbing and heating and air-conditioning (HVAC), offer the fundamental skills needed to get a head start in the aforementioned fields.

A recent visit to the Ed-Tech Center found members of Smith’s Construction Trades II class in the process of constructing a 1,500-square-foot single-story ranch house that will go to a local buyer upon its completion.

“Right now, our students are building a stick-framed house with three bedrooms and two baths right here at the school,” Smith said. “The house will be completely sided and all of its exterior doors and windows installed.

“By the time this house leaves the school grounds, it will be roofed, plumbed, wired, drywalled, the interior doors and trim painted and cabinetry completed.”

Smith pointed out that all of the homes constructed by Ed-Tech students over the years have been purchased by Lapeer County residents, other than one students built several years ago to house a selected resident through the local Habitat for Humanity program.

“When these houses are sold, it is solely to cover the cost of the materials” Smith said. “It’s not about making a profit. This program is about providing teaching, training and learning experiences for our students.”

When it comes to construction, Smith knows of what he speaks.

At the age of 16, Smith started out as a rough carpenter who was able to pay his way through college on his earnings.

He would later go into management for Walbridge Aldinger and other Detroit-area construction firms, where he held positions as a project engineer, general superintendent and vice president.

Three years ago, with the support of his wife, Smith decided to retire and devote his time and talents to giving back to the profession he loves.

That was to become a teacher.

“It was not an easy decision to give up a hard-earned lucrative compensation package for a teacher’s salary,” Smith said, “but happiness is not always about money. This is the most rewarding career I have ever had — though it does have its moments of frustration.”

He added, however, that those frustrations pale in comparison to the rewards he experiences through his positive impact on the hearts, minds and attitudes of his students.

“Seeing a student brighten up and smile when they finally understand a math concept they’ve been struggling with for years is one of my favorite moments,” Smith said, adding that his teaching style involves a “practical hands-on” approach,

“The kids that come to Ed-Tech are typically not college bound,” said Smith. “Rather, these young people are our future working class frontliners, those individuals our country so badly needs.

“The bottom line,” said Smith, “is that we need to start building the next generation of trades people right now or there won’t be anyone to build things and fix our roads in the future.”

Ed-Tech student Isiah Renden, 17, of Imlay City, is among those who plans to enter the construction field.

“I’m learning things in this class that will help me get a head start in this profession,” said Isiah. “A lot of the older guys are retiring and there is a growing demand for people to fill those positions.

“There is a real need for workers right now, which provides an opportunity for me and others,” he continued. “I’d like to get myself into a position where I can get a union apprenticeship.”

Though he is not planning on entering the profession, Almont senior, Issa Abu-Judeh, 17, expects to utilize what he learns in the class to achieve his future goals.

“It’s always best to learn as much as you can about everything,” said Issa. “Being able to learn skills in construction, plumbing, electrical and heating/cooling can only be advantageous.”

His current plans are to attend an electrical school in Trenton, Georgia this summer; after which he envisions a promising future.

“My goal is to work hard, to learn and eventually start my own business.”

Smith said he envisions increasing opportunities for his students at the Ed-Tech Center.

“I’m really trying to take this program to new levels by working towards an articulation agreement with the local carpenters union,” Smith said. “There is a good chance that when some of the top students leave here they will have a Level 3 certification, one year of the apprenticeship complete, and a foot in the door to work for a union.

“At a minimum, they will have the skills to earn a living wage and work towards a journeyman’s status or possibly obtain a builder’s license and eventually start their own business.”