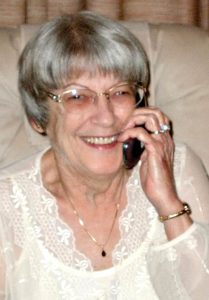 Donna Lou Haynes, 85, of Lapeer, formerly of Dryden, passed away Wednesday, February 10, 2021 at her home. She was born January 1, 1936 in the small family home on Bohlman Rd. in Dryden, the daughter of John (Jack) and Leola (Hall) Bohlman. She graduated from Dryden High School. After high school she married Richard Haynes in 1960 and together they raised their children on the family farm, Drymont Farm, where she spent her time caring for family. She had also worked in housekeeping at Oakdale Center in Lapeer. She was a member of the Eastern Star and St. John’s Episcopal Church in Dryden.

Donna Lou was an avid reader, master puzzler and enjoyed her two trips to Hawaii to spend time with family and absolutely loved her travels up north with her best friend, Sharon. Her family fondly remembers her for being a very kind person, always welcoming people into her home. She was a loving mother, grandmother and great-grandmother.

She was preceded in death by her parents; her husband, Richard; infant brother, Robert Bohlman; and sister; Mary Niblack.