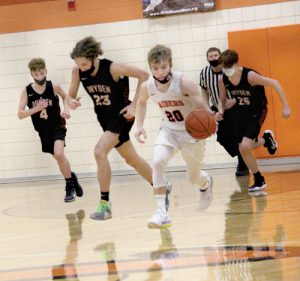 In Monday’s matchup, Dryden grabbed a 19-16 edge after one quarter was over with.

When the action resumed, Dryden bounced back with a 21-17 third quarter edge. That closed the gap to 58-56.

Almont then outscored Dryden by a 22-15 count the rest of the way, finishing off an 80-71 victory.

Joey Savel (21 points, including a pair of trifectas) and Blake Campbell (13) proved Almont’s toughest players to stop. They were backed by Logan Walton and Scott Pape (eight points, featuring a pair of treys, each), Charlie Koenig (eight, with a triple), Clayton Roszczewski (six, including a trifecta), Matthew Measel (six), Blake Cody (four, featuring a trey) plus Rich Rockey and Haden Lacavera (a triple apiece).