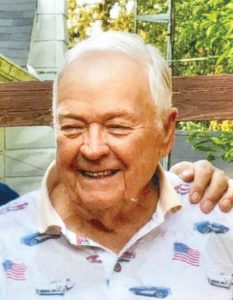 Ron Aldridge, age 92, of Lum, MI died Saturday, January 30, 2021 after an extended illness at Nicole’s Place of Lapeer in Elba Township, MI. Wilbert Ronald Aldridge was born September 29, 1928 in Detroit, MI. He was the son of the late David and the late Eliza (Muxlow) Aldridge. He grew up in Detroit.

Ron served in the U.S. Army at the end of World War II (1946 – 1948) earning the WWII Victory Medal and Army of Occupation (Japan) Medal. He was a graduate of David Mackenzie High School in Detroit, Class of 1948. Then, Ron served again in the U.S. Army during the Korean War from (1950 – 1951) earning the Combat Infantry Badge and Korean Service Medal with three Bronze Stars.

Ron was employed by Pontiac Motors, Division of General Motors Corporation, as a paint repairman. He retired after 30 years and then retired again after 11 years as a painter and maintenance man at Vlasic Foods in Imlay City.

The Aldridge family will be available for visitation 11 a.m. – 1 p.m. Wednesday, February 3, 2021 at Muir Brothers Funeral Home of Imlay City.

Due to recent health concerns of the COVID-19 pandemic, social distancing (six feet apart), masks (to be worn at all times), and limited occupation (25 people at a time) of the chapels of the funeral home will be enforced.

Please be sure to sign our on-line register book at muirbrothersfh.com to share your memories and condolences with the Aldridge and Kegler families.