TRI-CITY AREA — Imlay City High School junior Mary Lengemann is eager to get back on the basketball court but pandemic health orders from the state have delayed the season’s start. Frustrated with what those delays have meant for her and other student athletes, Mary shared her thoughts on the current situation as a speaker at Saturday’s “Let Them Play” rally at the state Capitol in Lansing.

“I’m so glad I was able to do it and stand up for what I believe in,” Mary said.

In her speech, the teen detailed how the Lady Spartan’s successful post-season was cut short in March 2020 due to COVID-19. Mary said she understood back then why precautions needed to be taken but can’t fathom why basketball and other contact sports are still on a hiatus when other activities like going to the movies or heading to the shopping mall are allowed.

“We know how to protect ourselves, we know the risks. We’ve done what you have asked and it worked,” she said in her speech directed at Governor Gretchen Whitmer and the Michigan Department of Health and Human Services. 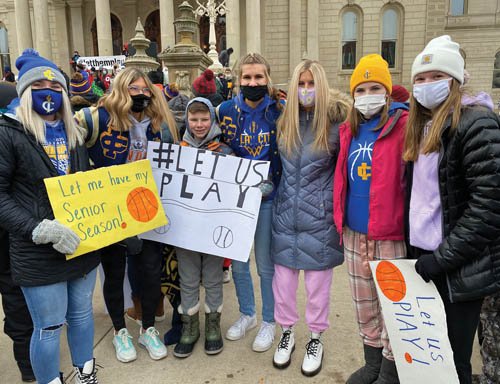 “We’re asking you to trust us…to trust in the future leaders of America. I wouldn’t be here today if I didn’t trust in my generation.”

“If there’s a time we need sports, it’s now more than ever,” she said.

As a junior, Mary acknowledged that she’ll at least have next season to play but she’s concerned for current seniors who are missing out on their last chance. Although some travel opportunities exist, not everyone can afford to participate in those programs, she added.

“Believe in us, stop the injustice and let us play,” Mary said in the conclusion of her speech.

Mary attended a similar rally in Lansing in December and was inspired by some “really great speakers” at that event and decided she’d volunteer to share her story if another rally was planned. When the January 30 event was announced, Mary made contact with the organizers and secured her spot in the speakers lineup.

She’s says she rewrote her speech five or six times, settling on the final draft just the night before, but she didn’t mind putting in the extra effort.

“It’s something I really care about and something I have lots of thoughts about,” Mary said.

Walking up the Capitol steps and looking out on the crowd of 3,000-plus people made her slightly nervous but in an exhilarating way. Standing at her side were her sisters, other family members, and a couple of basketball teammates. When it was her turn at the podium, Mary said any nerves melted away.

Currently, state emergency orders stipulate that winter contact sports, including girls’ and boys’ basketball, competitive cheer, ice hockey and wrestling must remain non-contact through Feb. 21. The previous order had been set to expire at the end of January and would have allowed those sports to begin contact activities February 1.