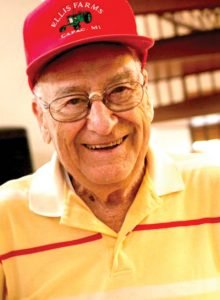 Clyde Ellis had a story for every room he entered and every person he met. Born February 2, 1920 in Lupton, MI, Clyde gathered and created many memories over his nearly 101 years, all of which he loved to share along with a joke and an uncanny ability to connect.

His earliest memory became one of his favorite stories. He often would tell of the day his brother came into the world in July 1924. Just a wee bitty boy, his sister held him up to the window of their home in an old lumber camp to see why he couldn’t see his mom and to understand what all the commotion was about. In 1926 when his father fell ill, the family moved to Clyde’s grandparents in Capac. Clyde remembers seeing electric lights for the first time when they pulled into Capac. By the time his father died in 1928, Clyde had already earned his first paycheck, $3.00, two years earlier picking strawberries. Those first few dollars Clyde earned ($43.07 in today’s terms) were deposited at the former Armada Bank and is now their oldest existing account. Those dollars grew throughout the years to help him buy cars, farms, and lots of other things.

Perhaps because she was a teacher herself or because of the lessons learned from her former Erie Canal boat owner parents, his mother Jessie knew the value of education and a job well done. She ensured that Clyde and his siblings went to school while still pitching in to help the Great Depression-era family get by. Clyde, his sister, Viola, and brother, Robert, first went to the Granger school on Tubspring road where they were taught by their mom’s sister, Gladys. At the height of the Depression, the family moved to Armada in 1932. With her father’s help, his mother acquired the first and only home she ever owned when the bank traded them a foreclosed house on Pig Tail Alley for all of the money in her family’s accounts and a small amount more.

Clyde graduated high school from the Armada School (now the school’s administrations building) and eventually Pontiac Business School from which he earned a Junior Accounting degree. A life-long learner, he later went to welding school in Yale in the 1970s and small engine repair classes in Lapeer.

In March 1943, when he was working at Fisher Body in Pontiac, Clyde was drafted into World War II. By this time the plant was already making 90 mm anti-aircraft guns. After passing the military physical in Romeo, Clyde chose the Navy. After finishing boot camp then Armed Guard School in Los Angeles, Clyde became a Signalman 2nd Class assigned to Merchant Marine ships. By Christmas 1943, he was on the new SS Charles A. Wickliffe Liberty ship tanker in the Gulf of Mexico. Over the next three years, Clyde traveled over 93,000 miles, crossing the equator twice on the way to Australia and back. On April 19, 1944, either a twist of fate (or a forgetful captain who accidentally left his orders at home) kept his ship at the harbor in New Jersey while the rest of the Liberty ships were sent to form a D-Day barrier.

When his time in the service ended, Clyde returned to Fisher Body in 1946 where he worked as the superintendent’s clerk. He and his brother would commute daily with a few others from their homes in the area to Pontiac. It was around that time that Clyde met his wife Adeline uptown in Armada. When the youngest of her four brothers wouldn’t take her home, Clyde stepped in for the first time to become her partner and driver – a role he would fill for more than the next 63 years. They married on August 9, 1947, and their daughter Charlene was born the following year. They started their married life in a small home in Pontiac closer to work. After their son Bill was born in 1949, the family moved back home in 1951 so that Clyde could start farming. While they lived in Armada, Clyde and Adeline bought the family’s soon-to-be sesquicentennial farm (1872) just outside of Lesterville (Berlin Twp.), where his mother was born, and moved the family there in 1961. In the meantime, he, his brother Earl, their cousin, and another friend bought adjacent lots on a small lake outside of Lewiston. Clyde was pretty active in his 30s during the ’50s. It was at this farm and at the cabin up north that Clyde and Adeline would grow their family and legacy. Clyde continued to commute to Pontiac until his retirement in April 1974. In the years since, Clyde spent his days eating Adeline’s pies, tending to crops and animals, and later creating anything he or his grandchildren could imagine in his workshop.

He and Adeline also enjoyed traveling throughout the years, making it to every state, often with their kids and grandkids along for the ride. An epic five-week trip in 1957 all the way to Vancouver, down the coast of California and back, in a 1957 Chevy with two children under ten was the first of many memories he would create on the road. In the ’90s, Clyde and Adeline often opted for escorted bus tours in Michigan and around the country with friends and others rather than their own car, motorhomes, or planes. These excursions and regular visits with friends at the Allenton Senior Center were a highlight of Clyde’s later years. In 2017 Clyde took one of his last big trips with other World War II veterans (and other wars) to Washington D.C. with Mid-Michigan Honor flights. His undying sense of curiosity lasted until the end and carries on through the children he helped raise.

Throughout his hundred years Clyde survived so much; including mumps, scarlet fever, COVID and other various ailments; even he wondered what would ultimately cause him to leave this world. In the end, he passed away peacefully in his sleep at home on January 28, 2020.

A private service was live-streamed on Tuesday, February 2 followed by his final rest at the East Berlin cemetery, joining five generations of his family exactly 101 years after his birth.