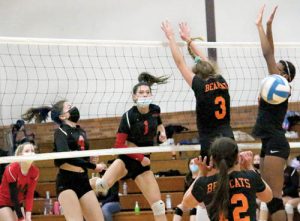 Dryden’s Erin Boettcher connects on a shot at the net during her high school season. Boettcher helped her club volleyball team go 3-2 last weekend in Indiana.

DRYDEN — Monsters 18 Elite club volleyball team, which counts Dryden’s Erin Boettcher among their ranks, put together a 3-2 record at a tournament it attended this past weekend.

Indianapolis, Indiana is where the matches were contested.

Monsters Elite began their tournament Saturday with a loss against Academy 18E Fury. They then incurred a setback to Premier 18 Onitsuka and earned a win against Lex United 87 Adidas.

That left them 1-2 at the end of day one action.

On Sunday, Monsters Elite would obtain a victory over Legends 18 Adidas and register a triumph against Lex United 87 Adidas.

That left the squad at 3-2 for the weekend.