Imlay Twp. Board, in 3-2 vote, denies
special land use request from developers

IMLAY TWP. — Last week the Imlay Township Board voted to deny a special land use permit submitted by the developers of a proposed RV park on Bowman Road.

Preliminary plans for the Sundance Shores RV Park called for more than 300 lots situated on the site of a former gravel pit owned by the Racz family.

Earlier this month the planning commission voted to recommend that the request be denied.

During Wednesday’s meeting, held virtually, many area residents spoke in opposition to the proposed development saying they had concerns regarding high traffic volumes, the impact on property values, excessive noise, the potential for trespassing and more. Imlay Township’s zoning ordinance allows campgrounds as a special land use for property zoned ag/residential.

The board voted 3 to 2 on the motion. Treasurer Melanie Priehs and trustees Mike Guerin and Chad Stoldt voted in favor of the motion while Supervisor Steve Hoeksema and Clerk Carla Jepsen voted against the motion to deny. 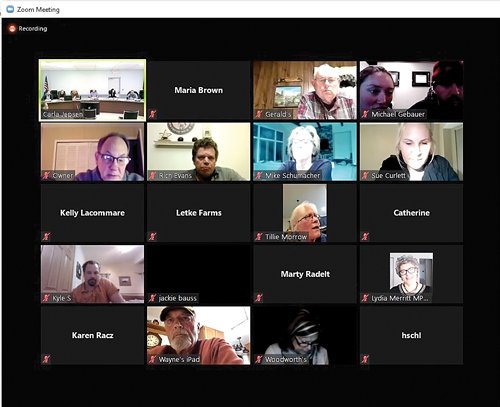 The board fielded public comment from many residents who voiced their opposition to the 300-plus site campground.

After the January 20 meeting both Hoeksema and Jepsen said they were in favor of sending the matter back to the planning commission for further review and hadn’t taken a stand on whether they approved or disapproved of the RV park plan.

Planning Commission Chairperson Rick Farkas
also felt the permit request should have gone back to his board before a final vote was taken.

“The momentum of that meeting was against you,” Farkas said to Justin and Darryl Racz of Racz Construction, referring to the public comment received that January 12 planning meeting.

“I was against you because of what I heard but that’s not the way it was supposed to play out. I feel bad about how this was handled. Everyone who moves out here wants their house to be the last one built.”

The Raczs fielded questions from board members and tried to allay concerns voiced from the public.

Justin Racz said they envisioned Sundance Shores RV Park to be a place that was peaceful and quiet. It would have operated between Memorial Day and October.

“We thought we were meeting the criteria,” Justin said regarding the special land use permit request.

According to a property description on their construction company’s website, the 193 acre property features a man-made lake that’s great for fishing plus 2,000 feet of frontage on the Belle River.

The board heard from dozens of residents in the area of Bowman, Rider, Bristol and Newark roads who were opposed to the plan.

Local resident Marty Radelt questioned the appropriateness of placing an RV park in a “farming community.”

“I would be very concerned for the for the safety of houses around it,” resident Crystal Zabel said.

Commenter Mike Schumacher said, “I can’t believe it has a benefit to anyone but the developers.”

Dale Duckert, who operates a farm and sawmill directly north of the proposed park, said he wouldn’t feel comfortable with guests that close to his property.

“It’s obvious this is something our community does not want,” resident Sue Curlett said.

Before making the motion to deny the request, trustee Mike Guerin advised the Raczs to consider a use more acceptable to their neighbors.

“You can sharpen your pencil but unless you come to an agreement with the public it’s going to be a long battle,” Guerin said.

After the vote, the Raczs indicated they would likely withdraw their RV park plan. Hoeksema said they had the option of revising portions of their permit request like changing the layout of the campground or reducing the number of RV sites.

“They have discussed several different options for that property,” Hoeksema said of the developers, “and they will propose something, I’m sure.”

Darryl Racz suggested that new home construction was another option for that site.