IMLAY TWP. — The Lapeer County Sheriff’s Office reports that a 29-year-old woman was killed Friday, Jan. 15 in a traffic accident on M-53 (Van Dyke) at the curve south of Bowers Rd.

Detective/Sgt. Jason Parks said police, firefighters and emergency crews were alerted to the head-on crash at around 8:17 a.m.

He noted that the initial report indicated that black smoke and flames were emanating from the woman’s vehicle while she was still trapped inside. 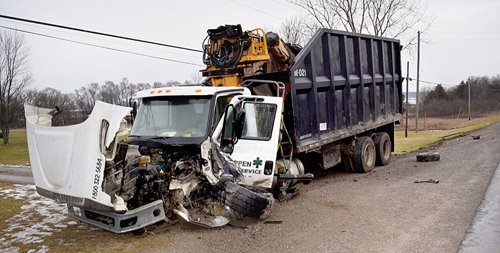 This northbound tree service truck carrying logs collided head-on with Megan Griffith’s southbound vehicle on M-53 at the curve south of Bowers Rd. Friday’s fatal accident was the second time in recent years that a fatality has occurred at that location.

He said a passing motorist with a fire extinguisher stopped at the scene and was able to extinguish the fire.

Parks identified the victim, Megan Griffith, 29, as the only occupant in a southbound 2008 Pontiac Torrent.

According to the Sheriff’s report, Griffith was southbound on Van Dyke, when she crossed the center line and partially entered the northbound lane, striking the driver’s side of a northbound 2006 International series truck owned by Kappen’s Tree Service that was carrying a cargo of logs.

Parks said the victim’s vehicle rotated before coming to rest within the west ditch.
“An off-duty Lapeer County EMS paramedic was able to free the victim, who was unresponsive, and begin CPR,” said Parks. “CPR continued on the way to McLaren Lapeer Region Hospital, but she succumbed to her injuries and was pronounced deceased.”

Parks said the northbound truck was driven by a 40-year-old Clifford man who was uninjured in the crash.

He noted that the roadway was wet, but not icy at the time of the crash.

There was no evidence of excessive speed, alcohol or drugs being contributing factors in the accident.

Imlay City Fire Chief Rick Horton acknowledged staff from the Lapeer County Road Commission for their efforts in cleaning up the considerable debris strewn across the highway.

Det./Sgt. Parks said the roadway was closed for about three hours to allow for rescue, investigative and clean up purposes.

He asks anyone with details or further information about the crash to contact him at 810-656-1015 or via email at jparks@lapeercounty.org.

Friday’s crash marks the second time in less than three years that a fatality has occurred on that portion of the roadway. In May 2019, Gary Franzel, a 48-year-old Sandusky resident, died following a multi-vehicle crash on the curve south of Bowers Road.

Megan Griffith leaves behind her husband, Adam; and two sons, Waylon, 3, and Aiden, 1; her parents; siblings; in-laws; and many other family members.

Family members said Megan worked for the State of Michigan. She loved her family and friends, and her boys were the light of her life. She always had a smile on her face and loved to help people. Megan will be truly and deeply missed.

Megan’s family and friends have created a Go Fund Me page at https://www.gofundme.com/f/in-memory-of-megan-griffiths-family
to assist the family with expenses.