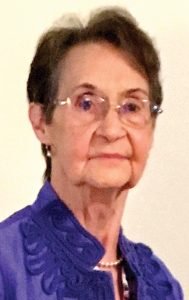 Linda Sheick, 82, of Gladwin, MI died Thursday, January 14, 2021 at William Beaumont Hospital of Royal Oak, MI. Linda May Bailey was born October 9, 1938 in Lapeer, MI. She was the daughter of the late Perry and the late Evelyn Bailey. Linda grew up in Dryden. She attended Dryden High School. Linda married Marvin Sheick. Marvin preceded her in death in 1991. Linda has lived in Gladwin, MI for the last 40 years.

She was employed as a nurse’s aide at Bortz Health Care of West Branch MI for 20 years. Later, Linda became a private home care professional before her retirement at the age of 79.

Linda was a member of the Oak Grove Log Church in Gladwin, MI. She was also a member of a West Branch Women’s Bowling League.

Linda was preceded in death by her husband, Marvin Sheick; her first husband, Donald Walker, Sr.; her son, John Jay Walker; and her brothers, Walter Bailey and Perry Bailey, Jr.

Cremation has taken place. Burial of cremated remains and memorial services are being planned for later in the month of June.

Please be sure to sign the online register at muirbrothersfh.com to share condolences and memories with the Sheick family.