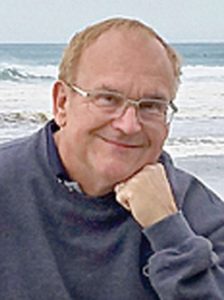 A native of Marysville, MI, John graduated from Central Michigan University with a degree in Journalism. He was the owner and publisher of the Sanilac County News and several other weekly newspapers in the Thumb and Macomb County. One of the highlights of his career was his reporting coverage of the Oklahoma City Bombing, both from Sandusky/Decker, MI, and from Oklahoma City. His further business ventures include Sanilac Centre Banquet Hall, commercial real estate, and property management.

John loved spending time with his cherished family; taking long walks with his dogs, BabyDoll and Yummy; golfing; traveling abroad and in California; Thursday Fun Day Trips; and cruising in his red Mustang convertible along the California Coast.

John will be forever remembered by Cherie Dishaw Johnson, his wife of 23 years. He was also married to Cathy Johnson for 20 years, and they had three children together.

Other survivors include his siblings, Marcia Senna (Dominic), Ed Johnson (Nancy), Cindy Johnson (John Martin), David Johnson; and his many nieces and nephews. John was predeceased by his father, Calvin Johnson.

A celebration of John’s life will be announced at a later date for Spring/Summer 2021, after COVID restrictions are lifted. He will be missed by all and forgotten by none.

In lieu of flowers, per John’s last wishes, the family requests that donations be made to the Memorial Bench Fund. All donations will contribute to the establishment of a public memorial bench along the Boardwalk in remembrance of John’s love of the St. Clair River. Checks may be sent to the Memorial Bench Fund, 1021 Costa Pacifica Way, Unit 2401, Oceanside, CA 92054.