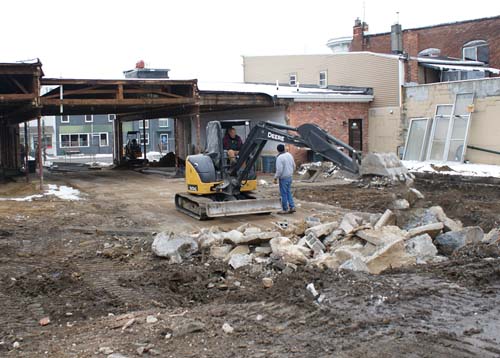 A view from behind the businesses along the west side of Main Street in Almont reveals the scope of downtown renovation being conducted by business owners Christy and Jeremy Yarbrough.

ALMONT — If you’ve driven through downtown Almont in recent days, you cannot help but notice the physical changes taking place on the west side of Main Street.

What you are witnessing is a major building rehabilitation project being conducted by Christy and Jeremy Yarbrough, owners of Yarbrough Insurance Group, LLC, which currently operates out of their offices at 130 and 134 S. Main St.

The project involves the ongoing demolition of the buildings that once housed the Glinski Hardware store and a former Mexican restaurant at 122 and 126 S. Main St., which the Yarbrough’s purchased in August 2020.

Christy Yarbrough described the project as extensive and required the support of the Village of Almont, Almont Downtown Development Authority and the Lapeer Development Corporation.

“The buildings were in very poor shape both structurally and aesthetically,” Christy Yarbrough said. “They had been deemed ‘functionally obsolete’ by the Village of Almont.

“We started the interior demo right away so we could get the architects to start working on drawings,” she continued. “We worked with two architects; one for the interior portion of the project and the other for the facades.”

Christy said the foot print of the new building will remain the same, but added that the structures will be brought up to code.

While pointing out that the couple utilized all local contractors, Christy said one of the project’s architects had designed the Yarbrough’s current locations at 130 and 134 S. Main St.

Yarbrough said plans are for a physical therapy clinic to move into the building at 122 S. Main St. in the spring.

“Doctors of PT (physical therapy) is awaiting the completion of that building to move in,” she said. “The clinic will be run under the direction of Shannon Michael, MPT, with an anticipated move-in date of May 15, 2021.”

She added that Yarbrough Insurance Group will eventually move its offices into the building at 126 S. Main St.

“As for our current buildings at 130 and 134 S. Main,” she said, “one is spoken for and the other will become available for rent later in the year.”

She noted that the future rental space had been completely renovated in 2015.

“Jeremy and I are very thankful for our clients,” she said. “Without their patronage this endeavor would not be possible.

“We offer a special thank you to Pete Michael and Larry Yarbrough (Jeremy’s father), whose wisdom and ambition have been integral.”

She also acknowledged their families, friends and staff, whose assistance and participation have been helpful.

“Almont is a wonderful community and we hope to see the downtown district grow and thrive,” Yarbrough said. “We like seeing new businesses and we’re happy to be part of that process.

“It has been blessing to have had such great support for this project.”

For information about the Yarbrough Insurance Group, or about renting the soon-to-be-available space, call the office at 810-798-3030.