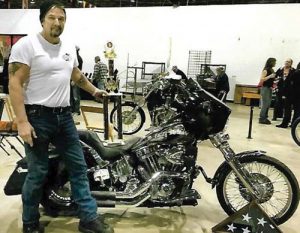 Jeff was born on June 6, 1959 in Lapeer to Lynwood and Rosemary (Psenski) Schaller. He graduated from North Branch High School class of 1977. Jeff went on to proudly serve his country as a Corporal in the 2nd MP Co 2nd Infantry Division in the US Army. He married Wendy V. Andersen on July 19, 1985 at the Immaculate Conception Church, Lapeer. Jeff owned and operated a trucking company (Jeff Schaller Transport, Inc.) with his wife, Wendy.

Jeff always lived his life to the fullest. If he was not driving or wrenching on one of the semi-trucks, he could be found beachside at the family lake house grilling on his Traeger, cruising country roads on his custom rebuilt Harley, hunting for that monster buck, or up north snowmobiling the trails with his son and brothers. Jeff had many memorable experiences such as driving a stock car at MIS, flying a World War II fighter plane, going on an elk hunt with his brother and coaching football. Jeff, however, always said his greatest accomplishment in life was becoming a “Dad and a Papa.” Jeff’s number one priority in his life was his family. He would fill you in on the latest information about each of his four beautiful children and his grandson, “Little man.” It didn’t matter if it was a football game in the rain and sleet at Siena Heights University, college intramural football playoffs in Mt. Pleasant on a Tuesday night, volleyball tournaments in Chicago or tennis matches in Imlay City, he was always there and the loudest parent in the crowd. Jeff worked hard so he and his family could enjoy life, which has left them with memories that will live on forever in their hearts.

In keeping with Jeff’s wishes, cremation services have been entrusted to Muir Brothers Funeral Home, Lapeer. A memorial Mass will be planned for Summer 2021 followed by military honors and burial at Great Lakes National Cemetery, Holly. Memorial contributions may be made to American Legion Post #457, 4075 Huron Street, North Branch, Michigan 48461.

Please visit www.MuirBrothersLapeer.com to leave Jeffrey’s family a condolence or share a memory.