Dryden resident, Wendy Lange, who turned 55 on Saturday (Jan. 2), fits into both categories. 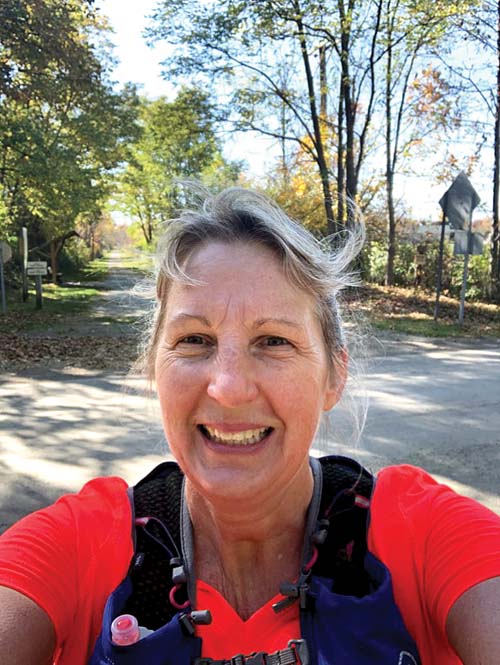 Locally, she has been a perennial participant in the annual 10K Polly Ann Trail Run, sponsored by Friends of the Polly Ann.

When not competing or taking on another challenge, Lange has often enjoyed the convenience of running the section of the Polly Ann from the Dryden trailhead into Oakland County.

However, until the autumn of 2020, Lange had never traversed the entire trail on foot.

That changed on the morning of October 17, 2020, when at 7:30 a.m. and temperatures sitting at about 30 degrees, Lange set off from Kings Mill south to the Imlay City trailhead and then on to Dryden, before continuing on the trail into Oakland County, a span of more than 36 miles.

She pointed out that running the entire
distance of the Polly Ann coincided with a period of COVID-induced tedium and
restlessness.

“The Polly Ann is truly a gem in Lapeer County,” Lange said. “When COVID-19 shut down so many activities, I needed something to take my mind off all the craziness in the world.

“I had run sections of the trail between Imlay City and Leonard many times before,” she said. “I had always wanted to run the section north of Imlay City, but never managed to do it.

“One day, as I was running south on the trail from Dryden, and thinking about what I could do next, the idea of running the entire trail came to mind.”

Given her prior experience running even longer distances, Lange was confident she could achieve her goal; though she would need to spend some time training for the big day.

“I started my training with runs of 10-15 miles along the trail south of Dryden and then began venturing into the Oakland County portion of trail which I had yet to run,” Lange recalled. “In September, my husband, Paul, would drive me to the north end of the trail at Curtis Road in Kings Mill.

“Because I had never run that part of the trail, and knowing it would be almost 17 miles to get back to Dryden, I was a little nervous,” she admitted.

Regardless, she made the most of the training period by observing early-morning sunrises and the abundant wildlife along the trail.

“I would watch the sun rise over the frosted fall surroundings,” said Lange. “I would see birds and deer and wild flowers growing everywhere. It was one of the most beautiful things I have ever seen.”

Having recently completed her goal of running the Polly Ann’s full distance, Lange can look back at what and who inspired her to run in the first place.

“I started running in junior high school,” she recalled. “I joined the track team and it very quickly became evident that I was not a sprinter, but I could do okay at longer distances.”

Over the years, Lange continued running and in 1995, ran a qualifying time in the Detroit Marathon that allowed her to compete in that year’s Boston Marathon.

“In 1996, I ran the 100th running of the Boston Marathon, which was an amazing experience,” she said. “In my early 30s, I took first-place in a small race in St. Clair Shores on Memorial Day.

“I have slowed with age,” she admitted, “but I still love to push myself for distance and pace.”

Lange credits her mother, Barbara Koteniski, for inspiring her to always do her best, which she applies to her personal passion for running long distances.

“I credit that drive to my mother,” she said. “She has always been a driven person who has accomplished many things in her life.

“At 84, my mother still exercises and enjoys outdoor activities. She goes to the pool at her park in Florida and exercises on most days.

“She has always been very physically fit and she is truly an inspiration to me.”

While still achieving at a high level as a runner, Lange said her biggest challenges for the future are dealing with the effects of aging. “I ran 50 miles the year I turned 50, and 66 miles the following year,” she recalled. “This year, running 36 miles seemed like challenge enough.

“As we get older, there is a balancing act between pushing enough to stay fit, and pushing so much you get injured,” Lange pointed out. “Injuries take longer to recover from as well.

“My goal is to keep feeling challenged, healthy and to enjoy the journey,” Lange concluded. “Running on a beautiful trail is truly my happy place.”