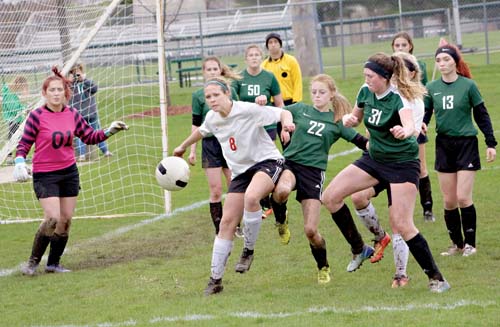 Dryden’s Ally Sobek (#8) battles for the ball in a clash with Brown City. She now plays at Madonna.

DRYDEN — Ally Sobek, a graduate of Dryden High School, is back for another season with the Madonna University women’s soccer team.

Sobek, a 5-7 sophomore, will battle it out for playing time at a defense/midfielder position.

Madonna University is projected to place third in the Wolverine Hoosier Athletic Conference, according to a preseason poll. UNOH is considered the title favorite, while Aquinas has been picked to wind up second.

Madonna University is scheduled to open their season February 6 with a WHAC indoor match at Lawrence Tech. The starting time for the league encounter has yet to announced.