IMLAY CITY — When Craig Horton assumed the job of Imlay City manager in July, he knew challenges lay ahead.

Given his financial background and experience in Lapeer County, Horton anticipated that the coronavirus would likely pose serious economic and operational challenges for the city and other municipalities and governmental entities. 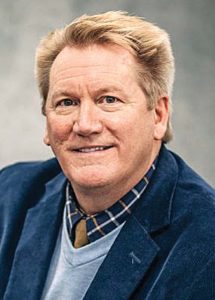 Now that the tumultuous year of 2020 finally reached its conclusion, Horton remains pragmatic, but is hopeful the new year will bring better tidings.

The following are some of Horton’s predictions for the City of Imlay City in 2021, and his vision for the future.

“Like most of you, the City of Imlay City is looking forward to 2020 ending and anticipating a better 2021,” Horton began. “The past year was the year of COVID-19, and not only did it impact us all on a personal level, it caused the delayed completion of city projects and postponed state projects.

“Even with all the delays, the city is proud to announce the completion of our new fire hall on East Borland Road behind Taco Bell,” Horton continued. “Construction of this much-needed facility began in the summer of 2019, and continued through this past summer.

“Fire Chief Rick Horton and our hard-working firemen have made the move and are operating out of the new hall. We want to thank the citizens of Imlay City for their support in making this possible.”

Horton also looks forward to the completion of the city’s new splash pad being built next to the Al Norlin Memorial Swimming Pool. The City was awarded a $150,000 DNR Recreation Passport grant to help fund the project.

“Ground has been broken for that project and we expect a grand opening in the spring of 2021,” he said.

Horton added that the city, in conjunction with the Downtown Development Authority, hopes to find a way to repurpose the old fire hall on Third Street downtown.

He said the city would like to convert the old hall into a year-round farmers market with some minimal redesign of the existing building.

“Very preliminary plans have been proposed that would allow for up to 32 vendors,” said Horton. “Completion of this project would create one of the larger farmers market facilities in the Thumb area. We are all very excited about this project.”

Horton noted that the city’s major sanitary sewer main infrastructure project, which began in 2020, will continue into 2021.

“This will continue replacement of a large sanitary sewer main that runs along M-53 from Fourth Street to the city’s wastewater treatment plant. This project also includes an upgrade to pumps and controls in the Newark Road lift station.”

Horton said the city will again apply for grant funding to complete infrastructure on Fourth Street, from Main Street to M-53.

“The last estimated cost for this project was $2.2 million, and the city applied for, but was denied, a $1.7 million Community Development Block Grant,” said Horton. “We’ll be meeting again with engineering firms in applying for any 2021 grants available.”

The city’s Parks & Recreation Commission is planning to open a sledding hill at Lyons Park.

“The DPW has worked diligently to have the hill ready for winter use,” Horton said. “The hill continues to be a work-in-progress, but we hope the hill will be available for sledding as soon as we get enough snow.”

“One of the biggest events that had been planned for 2020 but never happened (due to COVID), was the celebration of the city’s 150th anniversary, now scheduled to take place the weekend of August 13 in 2021.

“A new Sesquicentennial Committee will be formed, made up of City representatives, DDA representatives and Chamber of Commerce representatives. The celebration will take place in lieu of the chamber’s annual Busker or Blueberry festival.”

Meanwhile, Horton said the city continues to operate at a high level due to the efforts of city employees and staff.

“We thank all of our hard-working employees who continue their commitment to improving our community,” Horton said. “The city continues to grow and strive to be a community that we can all be proud to call home.

“We will also keep an eye on the city’s fiscal well-being. We appreciate the trust you place in us to do so.”