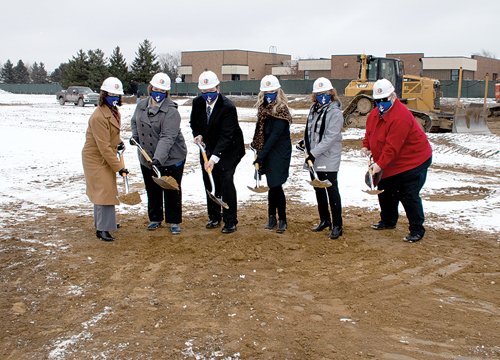 IMLAY CITY — Site work for the district’s Performing Arts Center started several weeks ago but the project got it’s official start earlier this month when the Imlay City Schools Board of Education, district administrators, students, and construction professionals gathered at the south end of Imlay City High School on December 17 to mark the new facility’s groundbreaking.

According to a press release from the district, the $14.2 million, 500-seat Performing Arts Center—which was included as part of the $38.6 million 2019 Bond Program that voters approved—will support performance arts and provide instructional space for both academic and community use.

“The Performing Arts Center will further enhance the world-class education we provide to Imlay City by serving as a teaching and learning space to expand student exposure to, understanding, and appreciation of the arts,” says Supt. Dr. Stu Cameron.

“But we also envision the Center as a community hub where everyone can interact and engage around the arts.”

Board President Sharon Muir said, “This facility is a crown jewel that will serve educational, community, and cultural purposes. It will greatly enhance the appeal of not only our school district, but the entire community. A state-of-the-art Performing Arts Center has long been a goal of our district, and it’s exciting to bring it another step closer to fruition.”

When complete, the Performing Arts Center will host choir and band performances, drama performances, presentations, assemblies, award ceremonies, extracurricular activities, dance recitals, community concerts, and local organization meetings. According to Dale Jerome, President of FRENCH associates, the architect on the project, the Center will incorporate theater rigging, lighting, and sound components on par with what you could expect to find in larger, professional performance venues.

The Center is expected to be complete in time for the 2022-23 academic year.

“That’s a big part of what the Performing Arts Center represents. It will be an asset to the local community.”