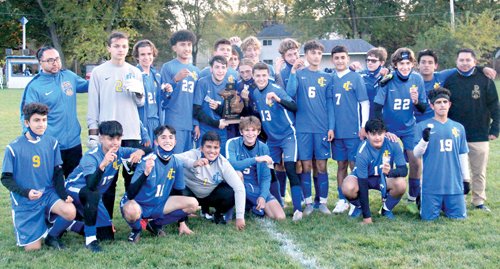 The Imlay City boys’ soccer team takes time out after winning a district title in 2020.

TRI-CITY AREA — This past year was one like no other, that point is indisputable. Here is a look at the top high school sports stories of 2020 along with a few others we think deserve honorable mention recognition:

1) The spring sports season is called off (April 8 issue).

The Michigan High School Athletic Association canceled the remainder of the 2019 winter and spring sports seasons last Thursday. They opted to make the decision in compliance the last “state of disaster” directive by Gov. Gretchen Whitmer’s closing school buildings and moving education online for the remainder of the school year to help prevent the spread of the COVID-19 coronavirus.

It marked the first school year to not see MHSAA finals played in multiple sports since 1942-43 when World War II led to the elimination of finals in most sports.

March 12 saw the MHSAA suspend its girls’ and boys’ basketball, girls’ gymnastics, boys’ ice hockey and boys’ swimming and diving tournaments amid COVID-19 concerns. All activity in all sports was halted March 13. Spring sports to that point had started practice but had yet to begin competition.

MHSAA Director Mark Uyl did not downplay the significance of the move, unprecedented in most of our lifetimes.

“We understand as much as anyone how much school sports mean to athletes and their communities,” Uyl said. “We had ideas and hopes for finishing winter and spring and helping bring some normalcy after this long break,” he noted.

“This is the correct decision and we will play our part in bringing schools and communities together again when the time is right.”

Because the five winter sports were not able to conclude with finals, no championships were awarded in those sports for 2019-20. However, championships won at the earlier rounds of those tournaments (district and regional) will continue to stand.

Ford Field, in Detroit, is where the action unfolded. 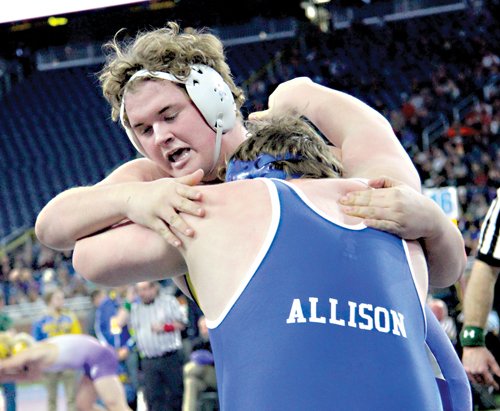 Stanton had the best showing among the grapplers mentioned, bringing home a second-place finish at 103 pounds.

He reached his weight division’s title match where he fell 16-1 to Dundee’s Braeden Davis.

Stanton finished the season at 42-6.

Dwyer took third at 140 pounds, closing out his tournament run with a 2-1 win against Flint Powers foe Connor Owens.

Harper headlined for Imlay City at the Division 2 event, contributing a second.

He advanced to the title tilt where he dropped an 8-2 verdict to Mason’s Jack Gilchrist.

For their performance Stanton, Dwyer and Harper earned All-State accolades.

3) A pair of Almont golfers excel at the Division 4 state finals (October 21 issue).

Brandi Kautz shot an 81 over 18 holes en route to a two-way tie for fifth place, leading the way for the Almont girls’ golf team at the Division 4 state finals last Saturday.

Kautz’s impressive outing began with an opening nine of 40.

She then followed it up with a 41, leaving her with an 81 total at round’s end.

For her performance, Kautz earned All-State status (given to the low 10 scorers) that day.

She finished the day with an 87, including an opening nine of 39 and a closing nine of 48. That paved the way to an 11th-place showing.

Imlay City cruised to a convincing 51-32 victory over Bloomfield Hills Cranbrook in a Division 2 regional basketball confrontation on Tuesday, March 10.

Goodrich High School is where the action unfolded.

The outcome placed Imlay City in the regional championship where it was to square off versus Lake Fenton.

However, that game was never contested as MHSAA tournament play was halted in the days that followed.

Weeks later, the rest of the winter sports season was called off.

Imlay City wrapped up their campaign as owners of an impressive 20-3 mark.

The Dryden volleyball team gave Ubly their best shot, only to drop a 24-26, 17-25, 19-25 verdict in a Division 4 regional championship battle last Thursday night.

Mayville High School is where the match was contested.

With the decision, Dryden watches an outstanding 21-5 campaign reach an endpoint.

“What a year it was for us,” Dryden Coach Christopher Schenkel said. “I could not be more proud of this team and their accomplishments this season,” he noted. “It may have ended a little earlier than we had hoped for but they still have so much to be proud of since Dryden has not gone to the regional finals since 1993, making this a huge accomplishment for them,” he noted.

“I just kept telling the girls to leave it all on the court, play every point as it is their last and just have fun playing the sport you all love playing.”

Brandon High School is where the action unfolded.

With the result, Imlay City sees a 13-2 season reach an endpoint.

“We had a very good season and finished as BWAC and district champions. With a team full of sophomores we are hoping to get back next season ready to go and show that this team is ready for bigger things.”

Jack Kaplan, a junior, led Dryden with 26 points that evening. He went over the 1,000-point mark for his career with a successful free throw during quarter number four.

8) The high school football season is called off, then is reinstated with a six-game regular season (August 19 and September 9 issue).

After months of speculation, a decision about the fall high school football campaign has finally been made.

Last Friday the Representative Council of the Michigan High School Athletic Association announced that the 2020 fall football season will be moved to Spring 2021 instead.

The football season switch was based on consultation with state health department officials and after surveying MHSAA member schools after the first four days of practice. Football is considered a high-risk sport for the potential spread of COVID-19 because of the level of player to player contact.

A few weeks later, football was reinstated by the Michigan High School Athletic Association to their traditional fall sports season. Governor Gretchen Whitmer’s Executive Order 176 lifted restrictions that previously did not allow that sport to be played.

Prior to that, girls’ golf, boys’ and girls’ cross country and boys’ tennis were the only sports that were allowed to compete.

Other fall sports such as boys’ soccer and girls’ volleyball were added to that list in the weeks that followed.

The volleyball and football postseasons were halted in November and should be completed next month.

That landed him a spot among the final 16 bowlers.

It was there he advanced to the championship encounter where Jonesville’s Logan Teubert provided the opposition.

Almont kicked off their Division 5 playoff run with a 28-0 win at visiting Ovid-Elsie’s expense last Friday.

A week later, Almont watched their postseason path wrap up with a 28-0 loss to Frankenmuth in district semifinal action.

With the outcome, Almont finishes their season at 3-3.

It was there Imlay City put up a good fight, only to drop a 40-26 verdict to Cros-Lex in a Division 4 matchup.

Adrian College is where the action unfolded.

The Imlay City varsity girls’ basketball team saw to it that their postseason path would continue a bit longer, rolling to a 43-29 victory over Marysville in a Division 2 district championship matchup last Friday night.

The Imlay City girls’ cross country squad saw to it that their season would last a bit longer, claiming a first-place last Saturday at a Division 2 pre-regional hosted by Lutheran North High School.

Brandi Kautz shot a career-best 75 over 18 holes and Jesse Hellebuyck carded an 88 on the way to second medalist distinction as the Almont girls’ golf team earned a first-place finish Monday at the Blue Water Area Conference Tournament.

Hannah Revoldt and Maggie Henige rounded out the winning Almont attack. Revoldt finished with a 98 and Henige chipped in a 109.

Dryden pulled out a 44-33 victory over visiting Waterford Our Lady of the Lakes in a Division 4 boys’ district basketball semifinal encounter last Wednesday night.

With the outcome, Dryden improves to 15-6 this season.

Dryden was to have faced Clarkston Everest Collegiate for district honors, but the season was halted and never resumed.

Imlay City saw to it that they would clinch the Blue Water Area Conference title outright, accomplishing the feat with a 42-20 triumph against visiting Armada in a varsity girls’ basketball encounter last Friday night.

It marked the first time since the 1999 campaign Imlay City has earned the distinction of league champion.

The Capac wrestling team nabs a share of the GTC title (February 12 issue).

With their showing, Capac (which won the dual portion of the conference standings) shares the title with tournament champion Caro.

Harper, who competes at 285 pounds, notched his 150th career win and 100th career pin when he stopped Pontiac’s Martine Jacobe with 1:02 elapsed during their championship bout.

Almont advanced to the state finals with a second the previous Friday at a Division 3 regional.

Strikers, in Richmond, is where the tournament was contested.

Strikers, in Richmond, is where the action unfolded.

He accomplished the feat when he pinned Brandon’s Nicholas Laskie 34 seconds into their bout, his second that day.

The milestone came in his fifth and final bout that day. It was there he pinned Mayville’s Abigale Gonzalez with 57 seconds gone.