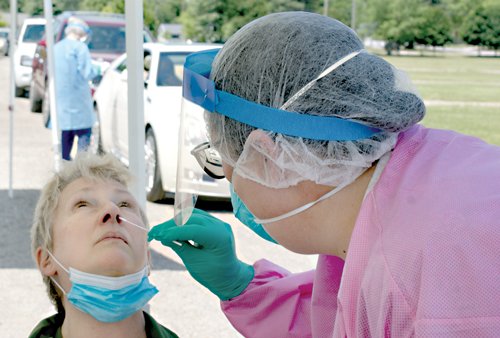 Marilyn Szost of the Lapeer County Health Department demonstrates the ease of a COVID-19 test at the fairgrounds in July.

TRI-CITY TIMES — As could be expected, there was no shortage of news in 2020, pandemic and otherwise. The following is a month-to-month list of some of the top stories from the past 12 months.

•Heavy rains cause flooding in the Village of Dryden, closing portions of Mill and North streets to traffic.

•The Imlay City Chamber of Commerce names Ron Rickard 2019 Citizen of Year; along with Merit Award winners, Barb Yockey and Frank Demske; and Ag-Community Relief as Organization of Year.

•Keihin Michigan Manufacturing of Capac merges with Honda and Hitachi, resulting in Hitachi owning two-thirds of the new entity.

•Capac Pharmacy closes its doors after 23 years. Owner Scot Sheldon blames exorbitant costs and the medical insurance industry for the demise of the business.

•Michaela Wolford, 11, of Imlay City, was seriously injured in a snowmobile accident, resulting in widespread support for the family.

•An Almont woman is abducted at gunpoint by her former husband who was later apprehended by Warren Police.

•Keihin North America, Inc. announced that they would cease operations at their Michigan Manufacturing facility in Capac, effective February 2021. The company said sales reductions were to blame. At that time the company said 165 employees will be affected by the plant’s closing.

•A 51-year-old Almont Township woman was attacked by three unlicensed Caucasian Ovcharka Shepherd dogs that were running lose. The victim sustained serious injuries and the dogs’ owner was charged with three misdemeanors for allowing the dogs to stray while not properly leashed.

•In response to local outbreaks of the coronavirus, local schools and businesses were forced to close and all special events canceled for the immediate future.

•The Tri-City Times is named a 2020 ‘Newspaper of the Year’ by the Michigan Press Association.

•Lapeer and St. Clair counties’ health department report their first deaths due to COVID-19. In Lapeer County, cases rose from eight to 45 in a matter of four days. By the end of the month, St. Clair County had reported 22 virus-related deaths.

•A severe hail storm wreaks havoc in the Tri-City Area, causing widespread vehicle and building damage to homes and businesses.

•REV Group announced that they had divested their shuttle bus business and sold those divisions, including Imlay City’s Champion Bus, to Forest River, a subsidiary of Berkshire Hathaway. It was the second time in seven years that Champion Bus had a new parent company.

•A 16-year-old Imlay City youth was arrested for breaking into the Exxon gas station on Capac Rd. in Imlay City.

•Work begins on the Almont DDA’s $193,000 Streetscape project along a section of Main Street downtown.

•An 1880-vintage home on Fourth Street in Imlay City sustained major damage in a fire.

•MDOT officials inform Imlay City that the installation of a flashing traffic signal at the corner of M-53 and East Borland Rd. will likely have to wait until 2021. The signal will be activated to alert motorists of Imlay City Fire Department emergency vehicles leaving their hall on Borland Rd.

•Work begins in earnest on building projects at Imlay City Schools made possible by a 2019 bond measure renewed by voters.

•Most summer festivals and fairs are canceled due to pandemic precautions. The Eastern Michigan State Fair was pared down to only a “Show and Go Showcase” for youth livestock exhibitors.

•Imlay City delays its proposed M-53 sewer project due to objections from CN Railroad that the project would interfere with the railroad viaduct. The city is now looking to reroute the project.

•Michigan Judicial Tenure Commission recommends that Lapeer Circuit Court Judge Bryan Konschuh be removed from the bench for mishandling $1,800 in county funds in 2014.

•Local school districts develop ‘Return to Learn’ plans for the 2020-21 school year and offer students and their families various learning options including in-person, virtual and remote programs in response to the pandemic.

•Local realtors report a booming market for homes sales in the Tri-City area. They site an influx of people moving to rural areas from the suburbs and more people working from home.

•Almont officials agree to remove the water tower’s former apple tree logo and replace it with the word Almontin old-English lettering in the school district’s colors.

•The Village of Almont moved forward with water main upgrades on several streets, utilizing the process of directional drilling.

•The Michigan Dept. of Transportation (MDOT) proposes that a boulevard be constructed in 2026 along the section of M-53 at the Kroger Plaza to reduce the frequency and seriousness of accidents in the area.

•November’s general election saw a record number of voters at the polls in both Lapeer and St. Clair counties where they decided the outcome of several contested races for school board, judgeships and state seats.

•The Imlay City Chamber of Commerce agrees to throw its support behind the city’s 150th Anniversary ‘Sesquicentennial’ on Aug. 13-14, 2021.

•A California-based company announced their plans to create a large scale solar development in Goodland Township on land between Bowers and Kohler roads.

•The Imlay City Fire Department was able to officially move into their new hall on Borland Road after building issues had been resolved. Ribbon cutting ceremonies had been held in June.

•Ground is broken for Imlay City’s new splash pad adjacent to the Al Norlin Memorial Swimming Pool. The $353,000 project is being funded in part by a $150,000 grant from Michigan Dept. of Natural Resources.

•Several local Catholic churches will be among those to be part of a major restructuring over the next two years. The Archdiocese announced that 216 parishes in southeastern Michigan will be grouped into 51 families comprised of 3-8 parishes which will share priests.

•Ground was broken for Imlay City Schools’ new Performing Arts Center on the south side of Imlay City High School. The project, along with a classroom addition at Weston Elementary School, are made possible with 2019 bond dollars.

•Both Lapeer and St. Clair counties saw a resurgence in the number of new COVID-19 cases and deaths, beginning in November and extending into December. The volume of cases delayed their usual efforts to perform “contract tracing” and help stem the spread of the virus. That month, both counties received their first shipments of the Moderna vaccine and began immunizing health care workers. As of December 28, 97 Lapeer County residents and 144 St. Clair County residents had died from the virus in 2020.