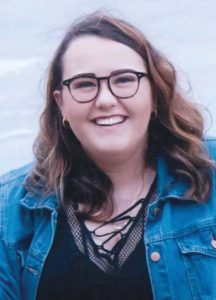 Sydney Lyn Pemberton, age 19, of Imlay City, MI passed away Monday, December 14, 2020 at C.S. Mott Children’s Hospital in Ann Arbor. Sydney was born February 20, 2001 in Troy, MI. She was the daughter of the late Robert James and Jana Lyn (Elliott) Pemberton. She lived her entire life in the Imlay City area and was a graduate of Imlay City High School, Class of 2019. She had been attending Mott Community College in Flint.

Sydney’s greatest high school memories involved playing the clarinet in the Imlay City High School Wind Ensemble and the Marching Band. She grew up attending the Imlay City United Methodist Church with her parents, grandparents, and brother, Robbie. Sydney had a passion for photography, one of the many talents she shared with her father. Her photos focused on the wonder of nature and her love of family and friends. She had online studios of her photos set up to showcase her subjects and her keen eye for photography. Sydney also enjoyed listening to a wide variety of music, from classic to big band to pop and rock. Like her father, she was very interested in science fiction, especially Star Wars and Harry Potter, never passing up a chance to enjoy a sci-fi flick on the big screen. She enjoyed RV camping with family and friends, a longstanding family tradition she helped carry on with her love of nature and everything the outdoors had to offer. Sydney was instrumental in organizing craft projects, swimming excursions, and card game challenges. Family trips to Colorado, California, and Disney are just a few examples of her love of travel and family. Her unwavering love and friendship with her brother was evident in the care she provided and the bond they shared.

A celebration of the lives of Sydney and Robert Pemberton will be held at a later date when it is safe to gather and share our cherished memories.

Please be sure to sign the online register book at muirbrothersfh.com to share your memories and condolences with the Pemberton family.