Songs of the season 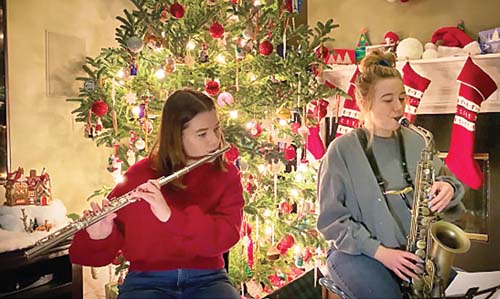 Sisters Olivia and Annika Wimpari teamed up to perform and record their rendition of “We Wish You a Merry Christmas.” Both are Imlay City High School students.

IMLAY CITY — These aren’t your typical Christmas cards but their reach goes far beyond a single mailbox.

This year, because live concerts aren’t a possibility, Imlay City Schools Director of Bands, Scott Pries, encouraged his middle and high school students to make “Musical Christmas Cards,” that is, recordings of themselves playing well-known holiday tunes to share with family, friends and the community.

“Since we can’t hold public concerts right now, the students and I were looking for ways to share music with our families, friends and the community,” Pries said.

“December is generally a really busy month for the IC Bands with Solo & Ensemble, concerts, Imlay City’s Christmas Parade and carolling at the elementary schools and local retirement homes. This year felt empty.”

Pries, who himself plays trumpet, said he recorded a number of Christmas songs as a gift for his grandmother and decided to use some of those as examples to the students of how they could make Musical Christmas Cards.

“The student submissions have been genuine and fun. They are having a wonderful time making the videos and I believe that they are also learning a bit about giving back to others with whatever talents you may have,” Pries said.

The district has been sharing the videos with the community on social media. Pries said they’ve heard from lots of viewers who are grateful to hear and see those traditional tunes performed.

“Everyone misses live music. We miss playing for live audiences. There is no substitute for live performance,” he said.

It’s not just the holidays that look different this year for Imlay City’s band program. Pandemic protocol has resulted in changes within Pries’ classrooms since the school year began in August.

“We are all looking forward to when we can get back to performing for families and friends. The students have been very flexible and understanding about the situation, but they all crave the opportunity to get back to live performances,” Pries said.

“There is no substitute for live performance.”

As of Tuesday, Dec. 22, a total of 20 videos had been shared on Facebook. They feature current students, Pries and alumni and Middle School class videos. Several of the individual recordings feature siblings performing together.

All the videos can be found on the “ICS Fine Arts” Facebook page.