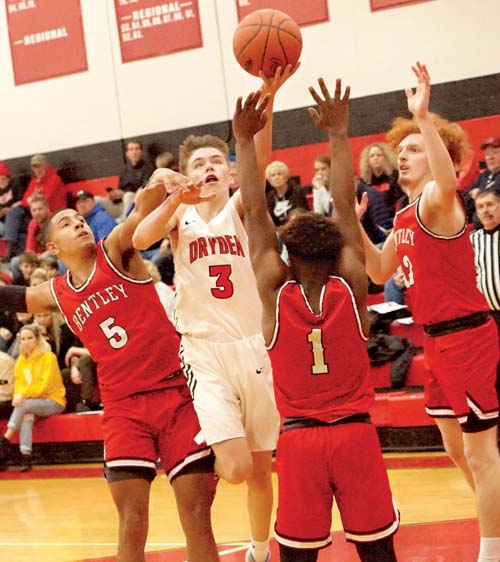 Jack Kaplan, of Dryden, goes up for two points in a game from last season.

Winter plans are expected to be announced soon

MICHIGAN – The three remaining Michigan High School Athletic Association Fall Tournaments still to be completed this 2020 season will resume with teams allowed to restart practice last Monday (December 21), according to an announcement Friday by the Michigan Department of Health and Human Services and a plan approved by the MHSAA’s Representative Council.
The MHSAA’s football, girls’ volleyball and girls’ swimming and diving teams and individuals still participating in tournament play will be allowed to do so as part of an MDHHS pilot rapid testing program designed to gain insight and collect data on the spread of COVID-19 as the MDHHS plans to provide expanded rapid testing available to schools in January. It is anticipated that specifics and details of the fall tournament pilot testing program will be coming from the MDHHS.
The football playoffs will begin Saturday, January 2 with regional finals for 11-player teams and semifinals for 8-player teams. The 8-player championship games in both divisions and all 11-player semifinals will be played Saturday, January 9. The football season will conclude with the 11-player finals in all divisions the weekend of January 15-16. All semifinals and in both 11 and 8-player will be played at home sites. Sites for championship games will be finalized soon and posted to the MHSAA website.
The girls’ volleyball tournament will resume with quarterfinals on Tuesday, January 5. Semifinals and finals will be played January 7-9 at Kellogg Arena in Battle Creek.
The girls’ swimming and diving finals return with its three Lower Peninsula finals held January 15-16, with one division at each of three locations.
Diving will be completed January 15, with swimming the following day.
All previous protocols remain in place and no spectators will be allowed at the fall tournament events.
All indoor sports which are not part of the pilot rapid testing program remain on pause from the MDHHS until January 16, although girls’ and boys’ alpine skiing season competed outdoors and will be allowed to begin practice.
The council met again yesterday to discuss details for the rest of the winter sports.
All spring 2021 sports are expected to begin on time and play complete seasons, concluding with their traditional MHSAA tournament dates in May and June.