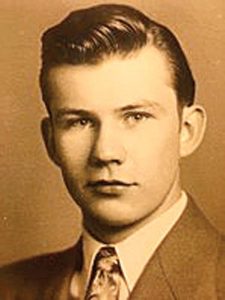 Erwin Walter Kot, 91, of Emmett, MI, passed peacefully of natural causes Thursday, December 17, 2020. He was born April 6, 1929, in Hamtramck, MI, the son of the late Wladyslaw M. Kot and Teofila Wdowinska of Poland.

Erwin graduated from Pershing High School in 1947. He was a meticulous typesetter and worked at the Polish Daily news and Detroit Free Press in Detroit and the Macomb Daily in Macomb County until his retirement.

He married his teenage sweetheart, Gertrude Anna Zawidzki on September 9, 1950, in Detroit at St. Louis the King Church. They were married for 64 years until her passing, April 25, 2015.

At the age of 22, Erwin was drafted into the Army for the Korean War. He proudly served from April 13, 1951 until April 14, 1953. He earned the rank of Corporal and was a steadfast patriot throughout his life. In 1956, he and Gertrude moved from Detroit to Riley Center Township, MI, and then settled in Emmett, MI in 1965.

Erwin was a devout aviation enthusiast; participating in flight, visiting multiple air shows, museums, and airports – all with his family in tow. He was a man who served God, a Catholic, and a member at St. Nicholas Church in Capac. He was a devoted father to his family and a supporter of his community, serving as a patron of the arts for many years. He could always be counted on for a lively conversation or a word of encouragement. He enjoyed the outdoors; farming, canoeing, or just taking a walk on his country estate.

A small gathering took place to honor the memory of Erwin with a Rite of Christian Burial on Saturday, December 19, 2020, at St. Nicholas Catholic Church, Capac, MI. The final blessing and burial was at Capac Cemetery, immediately following the mass.

For information and Guest Book
kaatzfunerals.com