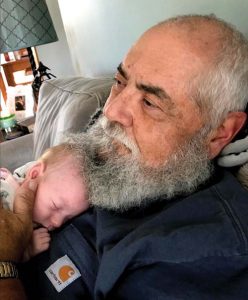 Michael Touchette, 67, of Imlay City, MI, died Friday, December 11, 2020 at Select Specialty Hospital of Flint, MI. Michael John Touchette was born March 17, 1953 in Almont. He was the son of the late John and Evelyn (Lentz) Touchette. Mike was a graduate of Imlay City High School, Class of 1971. He was a lifelong resident of Imlay City. Mike married June Louise Hoeksema on April 12, 1975 in Imlay City, MI.

Mike retired from Dyno-Tech Industries, in Troy, as a welder. Dyno-Tech Industries, in Troy, builds parts for high performance automobiles. Mike was performing material balancing welding on custom high performance racing drive shafts. He retired in 2014. Mike was very involved at his church, the Imlay City Christian Reformed Church; he was part of the audio/video team. He was an outdoorsman; he enjoyed hunting, fishing and camping. He loved to read science fiction stories.

Mike was preceded in death by his father, John Touchette; his father-in-law, Warner Hoeksema; and his sister-in-law, Julie Maison Hoeksema.

A private family prayer service has taken place and Mike has been cremated.

A family gathering is being planned for next spring or summer.

Those wishing to make memorial contributions in Mike’s name may direct them to the Ruth Hughes Memorial Library in Imlay City (for children’s literature and children’s programming).

Please be sure to sign the online register book at muirbrothersfh.com to share your memories and condolences with the Touchette family.