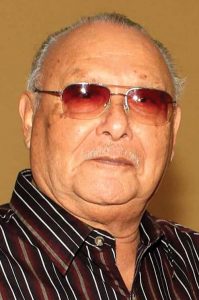 Modesto Guerrero, 90, passed away December 12, 2020 at McLaren Lapeer Region Hospital. He joined his beautiful wife, Joyce, who passed just nine days earlier. Modesto was born in San Benito, Texas on June 15, 1930. He was a long time resident of Imlay City, MI, where he raised his family.

Modesto worked at the Brisk Foundry in Imlay City for many years until it closed. He also worked at Oakdale and then retired from Trayco in Lapeer, MI. He was a hard worker and passed that trait down to his children as well.

Modesto loved listening to music and playing his guitar. He enjoyed working in his yard and relaxing outside in his gazebo doing crossword puzzles. Modesto enjoyed going to flea markets with his wife. Most of all, he enjoyed spending time with his family sitting around the kitchen table eating his wife’s delicious cooking.

A Celebration of Life, for both him and Joyce, will be held at a later date.

Please be sure to sign the online register at muirbrothersfh.com to share condolences with the Guerrero family.