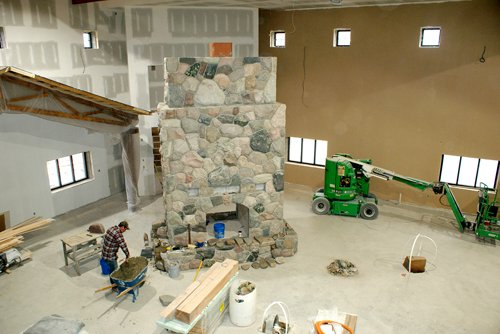 A look from above the new natural stone fireplace being constructed to greet customers as they enter the Country Smokehouse, which is undergoing a major rehabilitation.

At the height of deer hunting season, as many as 40-50 deer were being dropped off at the facility for processing.

“We’ve been open for boneless venison meat drop-off,” Francis said. “You can bring in your venison or other wild game meat to be made into our famous smoked and fresh sausage.”

Francis said the rebuild has been slowed by the impact of the coronavirus and difficulty in finding available contractors and workers.

Deliveries of materials have also been set back due to transportation and distribution issues.

On top of that, the Smoke House’s insurance company has been stalling on reimbursing the costs for damages incurred in the fire.

“It’s been one thing after another,” said Francis. “Now people are getting upset with us because the store still isn’t open. Believe me, we want to back in business as soon as possible.”

Francis said that when the retail store finally reopens, visitors will be impressed with the building’s appearance, which will offer new amenities and enhanced ambience.

Among those amenities are the facility’s new stone fireplace, which is being constructed by Imlay City stone mason Wes Phillips.

The project had been started by Wes’s father, Fred Phillips, who passed away during the summer.

This week, Wes was painstakingly placing some of the hand-split stones that were acquired from the local countryside, including the Francis’s property.

“It’s going to be beautiful when its done,” Sue Francis added.

For now, customers wishing to drop off deer or other wildlife are asked to use the north entrance beneath the building’s new overhang.

There are signs directing customers to that location.