Love in the time of pandemic

“I’ve never sold so many wedding rings as I have lately. There has definitely been a big upswing in weddings,” the owner of Imlay City’s Gem and Diamond Specialists. 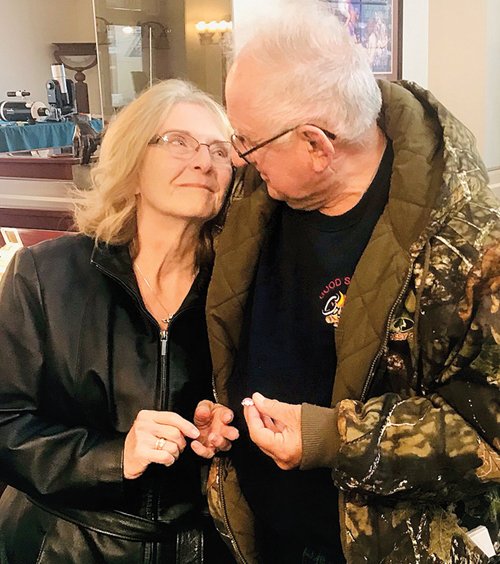 He thinks that the pandemic and associated changes to our everyday lives have pushed some people to reexamine their priorities, especially relationships.

“A lot of these couples I think feel like it’s time to make these commitments,” Johnson said.

One of the couples who Johnson recently helped secure wedding bands for were Linda Perreault and Corbett McCoy. The Lapeer couple is due to tie the knot this coming Sunday at their home in a small ceremony, just one month after they first met.

The couple, both widowed, met in a series of chance encounters in Walmart less than a month ago.

Linda was at the store looking for a Christmas gift for her grandson. Corbett recalls that Linda’s shopping cart cut the corner too sharp and ran into his, causing both to share a chuckle. Their paths happened to cross again just five minutes later at another point in the store. Finally, when it happened a third time, the two decided maybe they should get to know each other better.

“He mentioned going out to dinner at that third ‘bump,’” Linda said with a laugh.

“Since then we’ve had a lot of fun with this. It’s amazing how a chance meeting like that can bring such joy to two people.”

Just five days after meeting each other, Corbett asked Linda if she wanted a friendship ring or a diamond ring.

“On the sixth day he was taking me to Gem and Diamond to pick out a diamond ring,” Linda said.

Chance encounters are just that but both admit that they don’t go out in public places like stores that often anymore due to the pandemic.

“I think the guy upstairs had a hand in this,” Corbett said.

“When he puts us together multiple times in the same store within the same hour you have to think he’s trying to bring us together.”

Johnson said he was inspired by his client’s newfound love and said that in these challenging times, he appreciates sharing the positivity of experiences like theirs.

“It’s like that saying, ‘It was the best of times and it was the worst of times,’” he added.