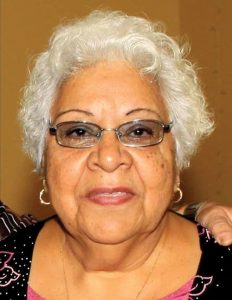 Joyce Guerrero, age 82, of Imlay City died Thursday, December 3, 2020 at McLaren Lapeer Region Hospital of Lapeer, MI. Joyce Ramirez was born June 3, 1938 in Reese, MI. She was the daughter of the late Jose and the late Trinidad (Ortiz) Ramirez. Joyce grew up in Imlay City. She and her family lived, back and forth, between Imlay City and Florida. Joyce married Modesto Guerrero on May 3, 1953 in Florida.

She was employed in food processing by Vlasic Foods in Imlay City for many years. Joyce loved to go garage sale-ing and go to investigate the flea markets.

She was preceded in death by her parents Jose and Trinidad Ramirez; sisters, her twin, Janet, Lupe and Eva; and her brothers, Daniel, Sam and Joe.

Please be sure to sign the online register at muirbrothersfh.com to share condolences and memories with the Guerrero family.