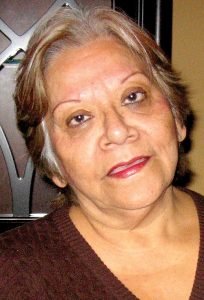 Our beautiful mother, Esther Guerrero, age 80, passed away Saturday, December 5, 2020 after a three week battle with COVID-19. She died peacefully in her sleep, with both her daughters by her side and her sons, in-laws and grandchildren on video. She left our world surrounded by those who cherished her most.

Esther raised her children to know the value of family and instilled perseverance and work ethic in each of them. She was a role model to her family, as she worked 43 years at Vlasic Pickles in Imlay City. She was a lifelong resident of Imlay City, where her parents, the late Jose and Trinidad Ramirez, built a farm in the early 1940s and raised 18 children. Esther is survived by her brothers, Jim, Aiden, Alex, Dan, Chuck and Zeke; sisters, Virginia, Linda, Connie and Dolores; and her companion of 15 years, Eliodoro Gutierrez.

A private service was held by her immediate family and a Celebration of Esther’s Life will be held next June 2021.