ALMONT — Almont Twp. Supervisor Paul Bowman joins Schools Supt. Dr. William Kalmar in their shared frustration with the continuum of electrical issues that have plagued Village and Township residents and officials for years.

Bowman is concerned with the frequency of power outages, and with subsequent power surges, which have resulted in costly damages incurred at district school buildings. 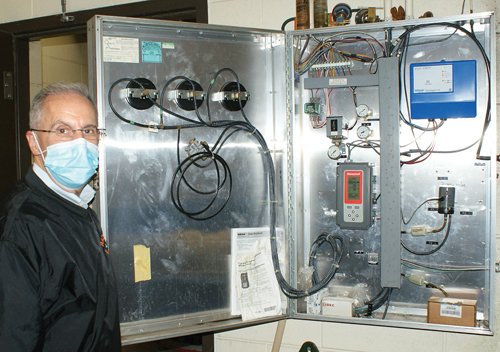 Almont Schools Building and Grounds Supt. Bob Jones points out some of the circuitry that was burned out during the most recent power surge, whose costs could reach about $125,000.

The damages rendered both schools unusable for instruction until repairs could be made. Students and staff in both buildings were due to return to class today, Dec. 9.

Kalmar said there were delays in getting the parts needed to make the repairs, due in part to the ongoing pandemic.

He reminded that Almont High School sustained significant damage in the summer of 2017 due to storm-related power surges.

Kalmar said that event cost the school district about $75,000, which was partially covered by insurance.

During a tour of schools on Thursday, Almont Schools Buildings and Grounds Superintendent Bob Jones estimated the most recent damage to be as much $125,000.

Jones said in his 15 years with the district, he’s witnessed seven such events, but the recent one resulted in the most damage and highest cost.

While Almont High School took the brunt of the damages in 2017, the Almont Middle School and Orchard Primary School were the most severely impacted this time around.

“This one was the worst we’ve had,” he said. “It took out just about everything at the middle school and primary school.

“Everything was fried,” said Jones, “including our climate controls, the boilers and all of the LED lighting we’d spent the past two years paying for and installing.”

Making things worse, the district’s insurance carrier, SETSEG, will only cover damages of up to $25,000.

“Because the cause of the surge was something off-site, our claim is capped at $25,000,” Jones said. “Had it happened on our property, it would have been covered.”

He added that the district is waiting on the delivery of needed parts to restart operations; deliveries which have been impeded due to the ongoing pandemic.

“We’re hoping DTE will come to the table and help us out with the costs,” Jones said. “The sad thing is as things stand, all of this money will have to come out of the school district’s general fund.”

Schools Supt. Dr. Kalmar has become exasperated with the continuum of electrical issues and DTE’s inability to help find a solution for the problems.

In addition to seeking assistance from DTE, Kalmar has submitted letters to 82nd District Rep. Gary Howell and Sen. Kevin Daley, requesting their help. The following is an excerpt from those letters.

“Since the 16th of November, we have not been able to occupy two of our schools because of the need to repair surge damage to climate control, fire and emergency systems, kitchens and lighting,” Kalmar said. “Our middle school remains uninhabitable because we cannot secure replacement parts for those destroyed in the surge.”

Kalmar said that DTE representatives had scheduled to meet with school officials on Tuesday, Nov. 24. However, that meeting was canceled by DTE.

“We contacted the DTE representative for this area, who scheduled a meeting with us to discuss the damage and some ‘new’ remedies to avoid future damages,” Kalmar said. “He subsequently canceled and now we cannot get a response from DTE about rescheduling this meeting.”

Meanwhile, Bowman said DTE’s plans to construct an electrical substation on a 22-acre site off Kidder Rd., south of the Drakeshire development, appear to be stalled or otherwise impeded.

“So far, DTE has not made any application to begin that project,” Bowman said. “It’s been discussed but no action has been taken as yet.”

He noted that the utility company would first have to acquire construction approval from the Zoning Board, which has not transpired.

“It’s really the electrical ‘brown-outs,’ followed by the power surges, that have been raising havoc with our systems,” said Bowman.

Almont Village of Clerk/Treasurer, Kim Keesler, is also hopeful that the eventual construction of a substation will be of benefit to all Almont area residents.

“The proposed substation is just outside the village limits in the township,” Keesler noted. “I would hope this substation can be completed as quickly as possible to accommodate the needs of all local residents.

“It appears that the substation they currently occupy is insufficient to keep up with the growth in the Village and the Township.”

On Friday, Dec. 4, DTE Energy’s
Corporate Communications Manager, Jill Wilmot, provided the following statement regarding the continuing electrical issues affecting Almont and Almont Township.
“DTE has been working with Almont Township to address reliability concerns from residents and the Almont school district,” Wilmot said. “We know their service is not up to the standard they expect to receive, or that we expect to deliver.

“Be assured, DTE is committed to providing the residents and businesses of Almont Township with safe, reliable power, and has invested in upgrades to the electrical infrastructure, including extensive tree trimming, which will be completed this month to help improve service.

“We are also working on future infrastructure improvements, including a new substation that is slated to begin construction in April 2021,” Wilmot continued. “We will continue to work with the Township, Almont School District and residents to provide them with the safe and reliable electric service they need and deserve.”