Water feature for children to be completed in spring

IMLAY CITY — Ground was broken on Monday, Nov. 23, at the future location of a new splash pad for kids in the shadow of Imlay City’s municipal water tower.

The work is being conducted by JDL Excavating and includes preliminary excavation and prepping the site for construction of the splash pad in spring of 2021.

Imlay City commissioners awarded the $353,000 construction bid to Penchura/Aquatix of Brighton on Sept. 1, 2020. 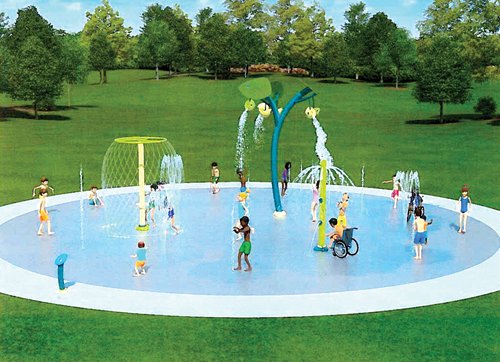 When finished, the new splash pad will include water fountains and spill buckets.

A significant portion of the splash pad’s cost will be funded through a $150,000 grant from the Michigan Dept. of Natural Resources Recreational Passport program.

The balance will be paid out of the city’s Parks and Recreation Board fund.

The state’s portion of the cost was the highest amount allowable per the terms of the city’s grant request to the Michigan DNR in 2019.

City Manager Craig Horton said the start of the project was delayed slightly due to the recent rainfall.

He said JDL had initially been scheduled to begin its prep work by the second week in November, but that was prior to the recent wind and rain storms.

A Penchura spokesperson indicated that pending additional weather delays, the plan is to complete all site work and plumbing installation soon, with the expectation that concrete will be poured in the spring.

“Unless, of course, we have a mild winter and we are able to pour sooner,” he said.

Once completed, the splash pad will approximate the size of the adjacent swimming pool to the north.