ALMONT — In the aftermath of extreme winds Sunday, Nov. 15 and subsequent power outages, a power surge has caused significant damage to the electrical systems at Almont Middle School and Orchard Primary School.

“Due to the heavy winds and weather, the school district not only lost power, but also suffered a power surge which disabled important building functions at the primary school and middle school,” Kalmar said. “While we are expediting repairs, we are now running into a spare parts shortage that is affecting much of the country.” 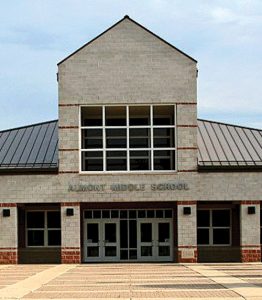 The climate control systems at both Almont’s Middle School, shown here, and Orchard Primary were impacted by last week’s power surge, forcing the district to close the buildings until Dec. 9.

Kalmar said that the damage had rendered both schools unusable for instruction until necessary repairs can be completed. As a result students at those two schools who had been participating in in-person instruction were transitioned to remote learning on Friday, Nov. 20.

Making matters worse was that the storm damage occurred almost concurrently with the Michigan Dept. of Health and Human Services’ COVID-related emergency order to cancel in-person instruction until Wednesday, Dec. 9, for grades 9-12.

Kalmar reminded that this was not the first time Almont Schools have experienced significant damage caused by a power surge.

He noted in the summer of 2017, Almont High School sustained extensive and costly internal damage resulting from an electrical power surge.

“It is extremely frustrating that we have had multiple major power surges that have damaged our schools,” said Kalmar. Since that big one in 2017, we have attempted to mitigate this problem as best we can.”

Kalmar believes the frequent outages and subsequent surges are associated with the Village of Almont’s continuing electrical power issues.

“From our understanding, many of these issues cannot be resolved until Almont’s power issues are resolved in general,” he said. “We did meet with DTE in 2018 to discuss these recurring issues and, at that time, they could offer no solutions. “We have considered a number of expensive options, but there have never been any guarantees that any of these would be 100 percent effective.”

Kalmar said
school officials were scheduled to meet again with representatives from DTE to discuss possible options and solutions.

As of Tuesday morning, Kalmar said he had not been informed of the the costs that will have to be absorbed by the school district.

“We do not have a total estimate yet, but the last one (in 2017) was a $75,000 event and only partially covered by insurance,” he said. “We are working with SET SEG (the district’s insurance provider) at this time.”

Even more frustrating to Kalmar is the loss of learning opportunities for students.

“Our elementary and middle school students should be sitting in their classrooms right now learning,” he said.

Those students who had been receiving face-to-face instruction are due to return to the classroom on December 9.