Success was in the wind

Austin Roy has a deep love and appreciation for the outdoors. His family recognized Austin’s love for the outdoors early on and extended their arm of knowledge and provided opportunity.

Austin is wise beyond his years. His father, Paul, credits the whole family for sharing their experiences with Austin. The Roys and the Mulholands took Austin small game hunting and waterfowl hunting, trapping and even morel mushroom hunting. Austin had an appetite for the all things outdoors and a belly full of passion. 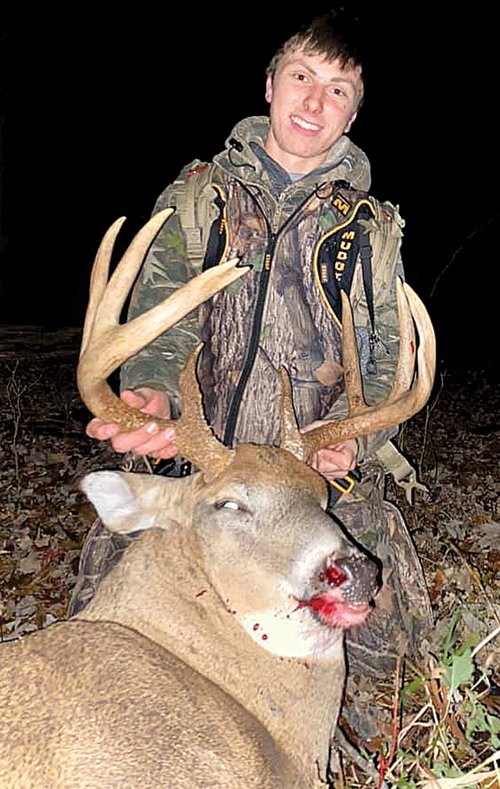 Austin Roy shows off a 140-plus whitetail buck taken in early November in Michigan’s Thumb.

Austin, 17, of Imlay City took a piece of that knowledge and turned it into scoring on a Lapeer County monster buck with his bow.

“I hadn’t seen this buck before other than a couple of trail cam photos I had of him back in mid-October,” Austin told me.

“I had hunted the stand before so I knew I had to have the right wind, otherwise he would bust me for sure,” he continued.

He knew success was in the wind.

Finally, in early November Austin got the wind he was looking for. There was a problem though, he was sick and sitting in a tree stand was not going to be a pleasant experience.

“I had been waiting for that wind for a couple weeks and nothing was going to keep me out of that stand,” said the determined young man.

He had visions of the massive rack and big bodied buck in his head as he sat motionless in stand. He hoped it would be the night he would show up.

The year before Austin had made a few mock scrapes in the area of this stand set. It had been a good stand for him in his short whitetail career.

Austin fought through the sickness and the boredom of not seeing hide nor hair of any whitetail. Getting closer to dark, Austin stood in stand to relieve his aching muscles. And out of nowhere there he stood, the buck seen on trail cam. The only deer he had seen all day.

“He just stood there looking. He would drop his head every once in a while to feed,” Austin remembers.

“I grunted to him several times, but nothing,” he continued.

“He was about 45 yards away and walked over to one of my mock scrapes from last year and reopened it,” Austin
said.

Getting himself in position for a shot, Austin took careful and deliberate aim, he released an arrow at 45 yards. It was a good shot and good placement.

“I target shoot a lot and commonly practice at up to 60 yards, so I knew I could make the shot,” he told me confidently.

He recovered the buck about 100 yards from where he shot him. It was indeed a very good shot.

“He was bigger than I thought when I saw him,” Austin told me, a smile from ear to ear.

The massive 9-pointer tipped the scales at 185 pounds dressed, had an impressive spread with enormous mass, it’s expected to score in the mid 140s. (Due to warm weather not all measurements were taken before being sent to the processor and taxidermist.)

“Austin has been a natural hunter his entire life. I can’t keep him out of the woods” his father Paul told me, chuckling.

“He just loves it, I think he has shot everything you can shoot in Michigan except a bear and an elk, but he might bag those before he gets out of his teens,” his father went on to say.

“I’m proud of him for staying focused, determined and his use of common sense. How he handles himself afield is a reflection of his genuine respect and love for the outdoors,” Paul concluded.