ALMONT — A single kind word can change someone else’s entire day for the better.

That is the message high school senior, Graceann Odett, hopes to convey in the large mural she recently finished in a hallway at the Almont Middle School.

Graceann, 17, recently completed the mural in conjunction with her senior “capstone project,” which requires Almont graduates to dedicate at least 15 hours to a challenging, meaningful and inspiring project.

“The purpose of the capstone project is to challenge ourselves to do something we would not normally do; to go above and beyond our usual limits,” said Graceann. “My hope is to remind everyone that we all have the power to say and do things that can positively impact someone else’s life.”

Graceann believes her artistic message is one that is uniquely applicable to middle school-age students, who find themselves betwixt and between childhood and young adulthood. 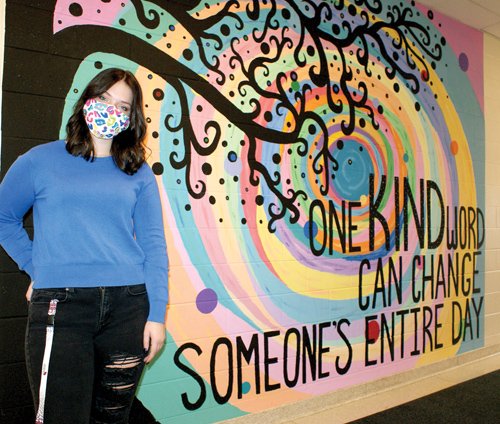 Graceann Odett strikes a pose with the mural she created at Almont Middle School in conjunction with her 2021 senior “capstone” project.

“I think middle school is a rough time for a lot of kids,” said Graceann. “It’s a transitional time when kids are trying to find out who they are.

“None of us really know what’s going on in other people’s lives or what they might be going through,” she said. “This mural is a way to remind everyone that a kind word or deed can change another person’s day in a positive way.”
Graceann noted that the pervasive presence of social media in young people’s lives only adds to their already existing stresses and insecurities.

“Everyone has a need to be able to fit in and be accepted by their peers,” she said. “But sometimes to do that they’re not being true to themselves and who they really are.

“Instead of being themselves, they try to be what they think other people want them to be.”

Given the inundation of social media and its potential for online bullying, Graceann hopes those viewing the mural will be reminded of the value of sharing a kind word with others.

Graceann said it took her about 60 hours for her complete mural on the wall near the classroom where her mother, Kim Odett, teaches special education students.

Though she has taken art classes with Almont High School art teacher Lisa Wright since her freshman year, she said her capstone project was challenging.

Graceann’s post-graduation plans are to to study psychology at Saginaw Valley State University in the fall of 2021.

“Graceann is such a leader in our school community,” VonHiltmayer said. “She possesses all of the admirable qualities to make a difference now and in her future.

“The mural is an excellent reminder to all of us to be kinder to one another, especially during this unforgettable, global pandemic.”

Graceann acknowledged VonHiltmayer; her parents, Kim and David Odett; Lisa Wright; and all those who have encouraged, supported and helped her to realize her own self-worth.

“I want to thank everyone for their support and help with this project,” she concluded.