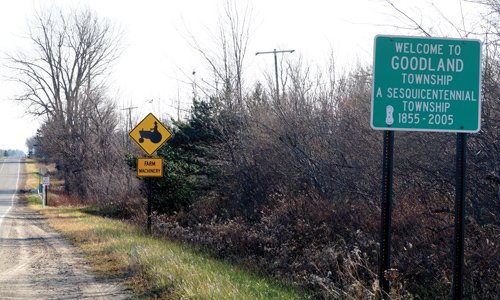 According to Goodland Township’s ordinance, solar energy projects must obtain a special land use permit and then submit their site plans.

GOODLAND TWP. — A California-based company is making plans to construct a commercial size solar array on land between Bowers and Kohler roads.

Orion Renewable Energy Group, L.L.C. confirmed that they are in the process of working with landowners to secure leases and then, in the coming months, seek site plan approval from Goodland Township.

One of those landowners who’s signed up several hundred acres for the project is Jeff Siegler.

“I believe this kind of project is a good thing for the community, otherwise I wouldn’t do it,” said the Imlay Township-based farmer who owns property in Goodland.

Siegler said he was first approached by Orion a few years ago and mulled it over for quite some time before deciding it was a smart move financially for him and his family.

It remains a challenge, even in good growing years, to realize a profit in farming so the prospect of guaranteed income over the span of 30 years just made sense, he noted.

Siegler said his family’s farm will continue growing crops and still have enough ground to raise the feed they need for their dairy cows. Additionally, they’ll be able to farm the leased ground until panels are actually installed, a process that will be done in phases.
“I like the fact that the land can eventually be put back into production,” Siegler said.

He’s also a proponent for green energy and believes the potential for solar energy generation is substantial.

“I’ve always considered myself a proactive farmer, I follow the trends and solar is really big right now,” Siegler said.

“The technology keeps evolving and the panels are much better than they were a few years ago.”

“We think we’re ready for them,” Cischke said of the developers, noting that they’ll rely on the advice of attorneys and engineers throughout the process.

Cischke said he’s been in contact with Orion representatives to discuss how public hearings can be conducted considering COVID-19 restrictions.

“As a board member I’m looking forward to it,” he said of the proposed project.

“It should be a good boost to our community but I realize we’re not going to make everyone happy.”

The township adopted a solar ordinance a few years ago. The intent then, Cischke said, was to address the interest in installing solar units on homes. Currently, homeowners can follow the guidelines and not be required to submit a site plan to the planning commission. That’s different from the commercial-scale installation Orion is planning.

According to the township’s ordinance, solar energy facilities are allowed as a special land use. Upon seeking that permit, Orion will need to submit an application that includes a project description and anticipated construction schedule, a copy of their decommissioning plans and a complaint resolution process.

Goodland Township’s Planning Commission will review the special land use permit and hold a public hearing. If that permit is approved, they’ll move on to the site plan review process.

The site plan must include project area boundaries and the location of all proposed structures and access roads.

Assisting Lapeer County in attracting and retaining businesses is something the LDC has done for nearly 40 years.

“As the renewable energy sector produces better technology I foresee more companies entering that market. Lapeer County offers many rural locations that may be attractive for development. In the long run I believe the individual townships, villages, and cities of Lapeer County will determine what is best for them,” Bishop said.

“It is all a matter of planning and making well-informed decisions that support future prosperity.”

Orion Renewable’s Michael Cressner said the footprint of the project’s facilities will be far smaller than the approximately 2,800 acres currently participating.

“Goodland Township offers an optimal location to generate clean energy for Michigan given its compatible land use and access to the electric transmission grid,” said Cressner, Orion’s Director of Development.

One of ITC’s transm
ission lines runs in proximity to the proposed solar installation.

Cressner said that once they receive the necessary permits from the township, the customer for the project’s energy will determine the timeline for construction. Orion says that new projects help create hundreds of new jobs during the construction phase. In the operations phase, there are sales and contracting opportunities for local business, they say, and each project generates significant property tax revenues.

To date, Orion has not undertaken an alternative energy project in Michigan. The company has developed 480 megawatts worth of solar projects currently operating with another approximately 1,000 megawatts of solar generation under construction or due to be operational in the near future.