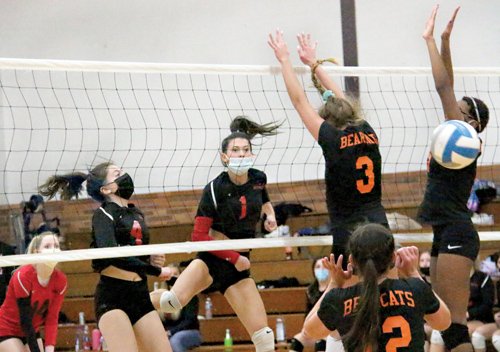 Dryden’s Erin Boettcher connects on a spike at the net during her team’s title clash with Ubly.

Mayville High School is where the match was contested.

With the decision, Dryden watches an outstanding 21-5 campaign reach an endpoint.

“What a year it was for us,” Dryden Coach Christopher Schenkel commented. “I could not be more proud of the team and their accomplishments this season,” he noted.
“It may have ended a little earlier than we hoped for but they still have so much to be proud of since Dryden has not gone to the regional finals since 1993, making this such as huge accomplishment for them. I just kept telling the girls to leave it all on the court, play every ball as it is their last and just have fun playing the sport you all love playing.”
Suffice it to say Dryden fulfilled his expectations and then some.

“This team had so many people rooting for them and cheering them on it was unbelievable,” Schenkel said. “Since many fans could not attend the games due to limited tickets sold we had fans literally from all over the United States watching them in the playoffs from their own televisions,” he noted.

“I would get so many messages from family members, friends, community members and so many more about how much they loved watching and cheering on this team. It was so overwhelming. This team had such a huge support system and the girls really took that into consideration for every game they were playing their hearts out for so many other people and they had no clue who they were. We will lose five seniors who won’t be forgotten. They now they have made history in Dryden volleyball and will be greatly missed.”

Boettcher and Daoud (two apiece) along with Grondin (one) contributed Dryden’s ace serves.