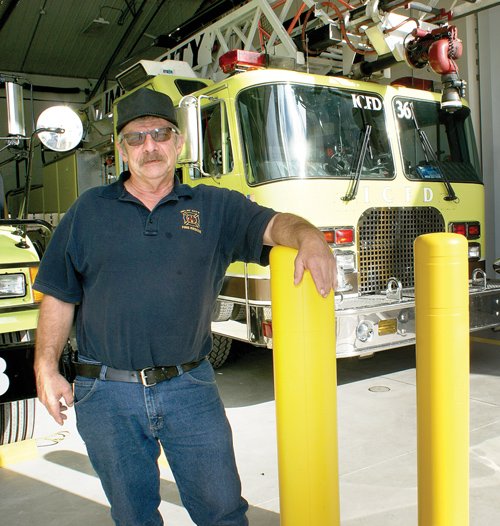 Imlay City Fire Chief Rick Horton said he and his fellow firefighters are pleased to be moving into the new fire hall on East Borland Rd. He is shown here with the department’s ladder truck.

The transition to the new hall had been delayed for months because of firefighters’ concerns about rainwater leaking into the hall from beneath the building’s bay doors.

Efforts were made to remedy the situation by installing new cement. However, water infiltration issues continued.

In recent weeks it became apparent to Imlay City officials and fire department officers that moving into the new $3 million hall had become imminent.

At Thursday’s Nov. 5 city commission meeting, fire officers in attendance conveyed their willingness to compromise and make the physical transition into the new hall.

Fire Chief Rick Horton said there exists a spirit of positivity among firefighters to finally be moving into their new building.

“This building is being paid for by Imlay City residents and it’s become necessary that we make the move,” Horton said.

“I’m personally happy about moving all of our operations into the new building,” he continued. “It had become difficult trying to work out of two separate locations.

“I think all of us realize we needed to get into the new building and we’re looking at this very positively,” Horton said. “This hall has been funded by our residents and it’s time to get settled in our new home.

“We’ve had issues, but we need to put the negative stuff behind us,” he continued. “This is a beautiful new building. I think it’s going to be good for the morale of our firefighters and for recruiting new firefighters.”

A ribbon-cutting ceremony/open house took place at the new hall on June 26.

Not long after, various construction-related issues began to reveal themselves; including a roof leak on the northwest side of the building and the aforementioned rainwater infiltration.