Almont bows out to Frankenmuth 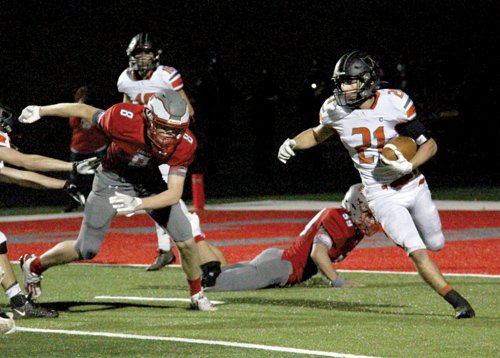 Almont’s Mason Smith looks to pick up a first down during his team’s Division 5 playoff game versus Frankenmuth last Friday night. Frankenmuth won the contest 28-0.

With the decision, Frankenmuth (8-0) advances to this Friday’s district title game at 7 p.m. where it will face Corunna (5-3). Almont finishes at 3-3.

“We knew we would have to play our best game of the season tonight,” Almont Coach James Leusby said. “Unfortunately, we just didn’t make the plays we needed to come out on top,” he noted.

“There is a reason Frankenmuth is rated as one of the top teams in Division 5, they have speed and the lots of size and should do well this postseason. In all I am just happy we were able to play football this fall for the boys. We will definitely miss having our community there on Friday nights. I will miss our seniors and have to thank them for working so hard this year and staying positive during all the adversity this season. As a program, we will take a few weeks off and then refocus on building strength back into our program. We have a lot of work to do this offseason if we want to return to the top of the BWAC.”

In Friday’s confrontation, Almont and Frankenmuth ended quarter number one with zero points each.

The next 12 minutes of gridiron action saw Frankenmuth accumulate 14 points and Almont generate none.

Frankenmuth then outscored Almont 14-0 from that point on, assuring themselves of a 28-0 win at night’s end.

For the evening, Brock Conger completed seven of 18 pass plays for 58 yards as Almont’s quarterback. He threw two interceptions en route to those numbers.

The Almont ground attack wound up with 49 yards on 30 totes.