IMLAY CITY — For the past five years, 8-year-old Alex Walton has sold poppies in front of the Imlay City Kroger store in conjunction with Veterans Day.

On Saturday, November 7, he was there again, joined by his grandma, Diane Fahnestock, a longstanding member of the Imlay City American Legion Post 135 Auxiliary.

The patriotic pair were kept busy by a steady flow of Kroger shoppers dropping donations into a collection jar, whose contents will be used to help disabled veterans. 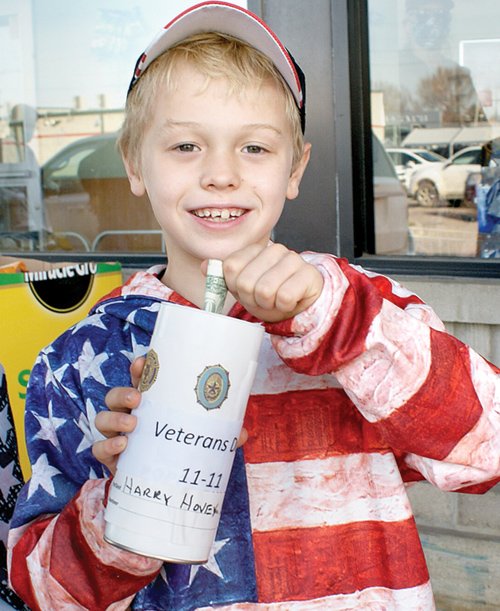 Alex inserts another dollar into the collection jar on Saturday. Auxiliary members reported that more than $1,000 was raised.

“I like to help our veterans because they have given so much for all of us,” Alex said. “I want them to have good lives and to have the things they need.”

He pointed out that selling poppies is a way for him to honor his grandfather, Barry Fahnestock, who served in the U.S. Navy during the Vietnam War.

An only child and avid reader of the Bible, Alex admits to being a little different from most kids.

“I love reading a lot and especially my Bible,” Alex said. “I don’t have brothers or sisters so I spend a lot of my time talking to adults. My parents and grandparents tell me I’m an old soul in a young body.”

Fahnestock said Alex has been blessed with a kind heart and a rare gift for understanding himself and others.

“He sometimes gets picked on,” she said. “He might get hurt by it, but he never holds it against them. He is very forgiving.

“Alex has more heart and soul in his little body than any adult I’ve ever known. I am very proud to be his ‘Nana.’”

A mini-philosopher of sorts, Alex describes himself as a hopeful “realist.”

“There’s a lot of things I hope to do,” he said. “I’d like to be a Navy chaplain and then be a pastor.

“I believe we should respect one another and treat people how we would like to be treated,” he continued. “I think I have feelings for other people’s emotions.
“But I’m a realist,” he added. “I’m someone who doesn’t look up or down, just straight ahead.”

Fahnestock said Alex sometimes experiences what he describes as “God moments,” when he is able to find hope and inspiration, even during sad times.

“One of my God moments came when I was real sad after my 16-year-old cat, ‘Mercy,’ passed away,” Alex recalled. “I  was looking at the sky after Mercy died and I saw just one large cloud with an arc coming from it — just like a rainbow.”

Besides keeping up with his Bible readings and school work, Alex enjoys learning about gardening and woodworking from his grandpa.

“He is already developing skills and has a strong work ethic,” Fahnestock added.
Alex is the son of Jennifer and Daniel Walton.

For those who missed out on buying a poppy from Alex and his “Nana,” there are more opportunities to purchase a poppy and support veterans this weekend.

Today, it remains an iconic symbol of honor for the sacrifice of our veterans.